FGCU is taking its 20th anniversary celebration to the streets Saturday, Feb. 18 in the 79th Annual Edison Festival of Light Grand Parade, billed as the largest nighttime parade in the southeastern United States.

Students and alumni will shine a light on The FGCU Effect aboard a custom-designed float in the 7 p.m. parade, the centerpiece of Fort Myers’ monthlong tribute to inventor Thomas Alva Edison, who spent his winters at a local estate for 50 years. The Grand Parade draws thousands of spectators every year to see national and local marching bands, community floats competing for prizes and more. The route begins at the Fort Myers High School stadium and travels north on Cleveland Avenue/US 41 to downtown Fort Myers.

Our own Fabiana, the high-energy student host of @FGCUlive on Snapchat, will be among the students riding on the float and snapping scenes of all the fun so you can follow along. The 35-foot float features an FGCU Effect mural designed and painted by students as well as scaled-down models of the Sugden clock tower and the obelisk at the main campus entrance. 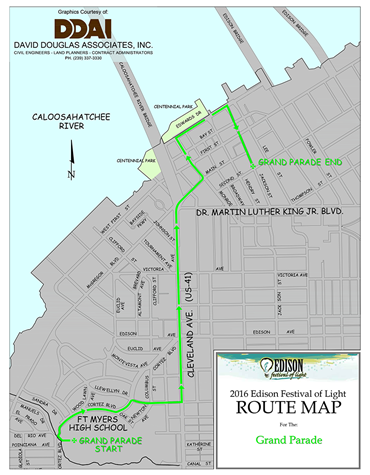