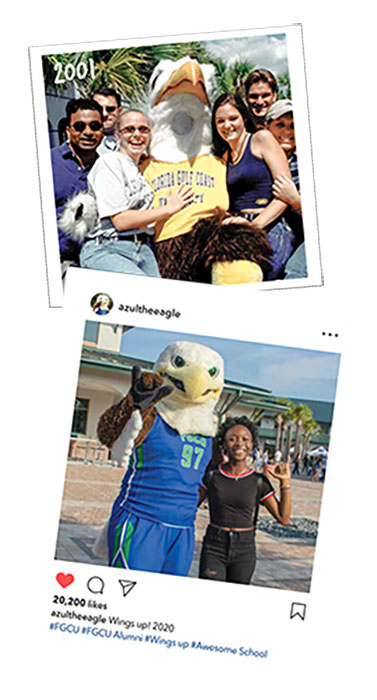 When most of us look at photos taken past and present, we see the reality that time stops for no one. Except Azul the Eagle. In fact, the feathered fellow frequenting FGCU events as our official mascot has grown better during his 20-year flight of fancy, with a far more expressive look today – not to mention a contemporary uniform that at least matches our colors (where did that yellow shirt come from, anyway?).

Born from a concept created by FGCU students in 2001 and an original costume fashioned by a company in Canada, Azul has more than filled the bill as university ambassador since being given his lofty perch. He’s a three-time winner of the ASUN Conference Most Valuable Mascot Award and was ranked No. 6 in the website Yardbarker’s 2019 list of Greatest College Mascots of All Time. He inspired a 2015 art contest, Azul’s Flight Tour, with beautiful statues of The Taloned One still scattered around campus.

The Alumni Association and Student Government last year commissioned and dedicated an iconic bronze bench upon which Azul presides outside the Cohen Student Union. He has his own Facebook and twitter accounts on social media, and he’s a frequent flier at @fgcu on Instagram. He’s even cult leader of the Dirty Birds student cheer section, which you know loud and clear if you’ve attended Alico Arena basketball games.

You get the picture. The word on this bird is that he makes a big flap, wherever he goes. And during the wing span of his impressive reign, this eagle eyes up better all the time.