David I.J. Wang likes to use the fortune he earned as a top business executive to follow his heart, but he’s all business when it comes to how his heartfelt gifts should be used.

The philanthropic passion of Wang, who retired almost 25 years ago as executive vice president of International Paper Co. in charge of sectors that accounted for more than a third of the company’s $13 billion in annual sales at the time of his departure, is a group that operates at the lowest end of the economic spectrum: the Coalition of Immokalee Workers, a rights organization internationally recognized for achievements in social responsibility and combating human trafficking and gender-based violence at work.

Built on a foundation of organizing a farmworker community starting in 1993, the mission drew in Wang from its earliest years.
“I have worked with the coalition for almost 20 years in their struggle for a living wage and self-respect,” said Wang. So driven to bring higher education to those who might not get it, Wang and his wife, Cecile Liston Wang, have been helping FGCU first-generation students for several years, starting with gifting more than $200,000 to create the Cecile Liston Wang Endowed Scholarship Fund in 1999. In 2012, they donated $500,000 to create The Immokalee Fund, another gift earmarked to help first-generation students, many the children of the coalition’s founders. As a quasi-endowment, this gift was structured to give more students more financial help faster.

“I decided a couple years back that instead of parceling out philanthropy in small slices, I would focus on some potential big-impact projects, one of which is the establishment of The Immokalee Fund,” said Wang, who was born in Beijing, China, and came to the U.S. with his family after World War II. “And I wanted to put in a larger amount specifically toward first-generation applicants. Hopefully, it will encourage others to do something similar.”
He works hard at setting an example. The Wangs spontaneously added $50,000 to the pot at FGCU’s President’s Gala earlier this year. “We just decided that instead of bidding on auction items, we’d just add another $50,000 to The Immokalee Fund,” Wang said. They also recently pledged an additional deferred gift of $1.5 million – $1 million in David’s name and $500,000 in Cecile’s.
The payoff for benefactors such as the Wangs can sometimes be quantified easily; The Immokalee Fund, for instance, has awarded $214,000 to 106 students since the 2014-15 academic year. But the personification of such generosity can’t be reflected in facts and figures.

“Every year the university sends me a packet about the recipients, and in it are letters from the applicants about their vision of his or her role in society,” Wang said. “What impresses me most about these notes written by the students themselves is that they put heavy focus on public service.” Consider the words written by Christina Harding Cruz, who plans to graduate from FGCU in spring 2017 with a degree in social work and launch a career helping reformed criminals get the chance for a “new beginning in society.” A two-time recipient of an Immokalee Fund scholarship award, this daughter of the rural Collier County community started her own homeless project, “Love Is Not an Option,” distributing 100 bags of sanitary products to her area’s homeless at the Guadalupe Center.

“I am truly grateful and thankful for all who support my aspirations, goals and education,” Cruz wrote. “I’m a simple girl who came from nothing, who is striving for excellence to become somebody. I want my peers to see me, know my story and be inspired to do better. “This scholarship award broke the boundaries of poverty and the reason why I can’t go to college,” she continued. “I am so excited to graduate and start a new chapter in my life. I know without you, it would not have been possible.” 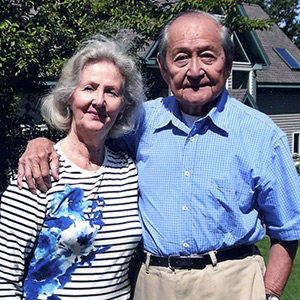 Cruz is a prime example of The FGCU Effect – inspiring those who inspire others. In the future, Wang envisions even greater impact from “The Effect.”
“FGCU has been very realistic and responsible being a grass-roots, start-up university…building the curriculum and specialties around the needs of the Southwest Florida region,” Wang said. “Now, ultimately, we have got to find a way to bolster technology and science at FGCU. A robust community has got to have a stake in high-value-added technology. Now, our young professionals are tied to service industries, or are lawyers who work on my estate, or tax accountants who work on saving me money. For scientists, chemists, engineers, mathematicians, there are very few job opportunities in this area.

“It’s not something that can be solved in a decade, but going forward, Southwest Florida can’t be made up primarily of retirees,” Wang continued. “It’s our good fortune that Arthrex (an orthopedic medical-device manufacturer based in Naples) ended up here. The owner (Reinhold Schmieding) first came here as a tourist. What we need is five or 10 more Arthrexes in the community to attract and retain young professionals.”

But with that business success will come a greater responsibility, at least in Wang’s world. “Be successful in business,” he said, “but don’t turn your back on your societal obligations.”