In front of a record-setting crowd of 4,633 fans, the FGCU women’s basketball team defeated the University of Michigan, 71-62, in Thursday night’s WNIT Semifinal at Alico Arena. With the thrilling victory in the final home game of the 2015-16 season, the Eagles move to 33-5 on the year, while Michigan’s season ends at 21-14.

The Green and Blue advances to its first-ever WNIT Championship and will face South Dakota on Saturday, April 2 at the Coyotes’ DakotaDome in Vermillion, S.D. The championship contest is slated for 3 p.m. ET and will be broadcast live on CBS Sports Network.

“It was a great defensive effort against a great offensive team,” said head coach Karl Smesko. “Now we’re excited to get to play for the WNIT Championship. The crowd was exceptional tonight. It was a huge advantage for us to have it here with that type of atmosphere. I’m sure it’s the type of game that these players will remember for a long time.” 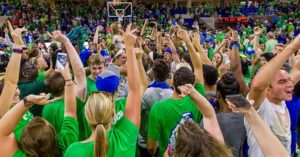 FGCU went into halftime with a 28-22 advantage and extended it to a game-high 10 points in the opening minutes of the third quarter. Michigan did not back down and used a 5-0 run to end the quarter, bringing the outcome to the final 10 minutes. The Wolverines tied the game quickly to open the fourth period but the Eagles responded to each Michigan advance. The teams traded baskets down the stretch before a long-range shot with under three minutes to play gave Michigan a 60-59 lead.

Senior Stephanie Haas knocked down a 3-pointer from the left corner on the team’s next possession, sparking the crowd and giving the Green and Blue control again. Kaneisha Atwater added another 3-pointer on the next time down the court, giving FGCU a five-point advantage with 90 seconds to go. FGCU outscored Michigan 6-2 in the final minute with six makes from the free throw line and pulled away with the 71-62 victory.

Haas led all players with a season-high 20 points against the Big Ten foe. The senior went 7-for-9 from the floor and pulled down three rebounds. Atwater and Whitney Knight contributed 18 and 17 points, respectively, with Atwater leading the rebounding effort with seven.

As a unit, the Eagles shot 48.1 percent and limited the Wolverines to a 37.3 percent mark from the floor. Michigan outrebounded FGCU 45-25 and produced 18 second-chance points but the Eagles scored 20 points on Michigan’s 14 turnovers and knocked down 11 3-pointers for the edge.

The win stands as the team’s fourth over a power conference opponent this season as the Eagles previously defeated Arizona, Auburn and Wake Forest. FGCU finishes the home season with a record of 19-3 at Alico Arena and extends its program-record win total to 33.