Fans ‘off the charts’ as men win Dance ticket

In an action-packed game with 16 ties and eight lead changes, the 4th-seeded FGCU men’s basketball team (20-13) outlasted Stetson (12-22) by a final score of 80-78 in overtime Sunday night at Alico Arena to claim the 2016 Atlantic Sun Conference Tournament Championship. 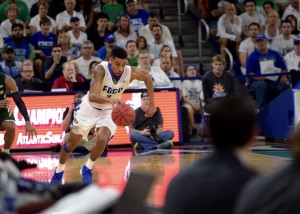 The win marks the Eagles’ second A-Sun Tournament Title, and the team will return to the NCAA Tournament for the second time in four seasons. In its inaugural appearance in 2013 — its second year of Division-I postseason eligibility — FGCU became the only 15th seed to ever reach the Sweet Sixteen and earned the nickname Dunk City for its high-flying style of play. The team’s Cinderella story captured the hearts of college hoops fans all over the country.

FGCU will learn its NCAA Tournament opponent when the bracket is revealed live on the Selection Show from 5:30-7:30 p.m Sunday, March 13 on CBS. Fans who are interested in securing tickets to the NCAA Tournament are asked to contact the FGCU Ticket Office at 239-590-7145. Priority will be given to Eagles Club members; those who are not Eagles Club members for this season can contact Allison Bass at 239-590-7107 for more information. Additional ticket information will be released during the week.

The women’s team faces Stetson in the A-Sun Championship semifinal on Wednesday, March 9 at 7 p.m. in Alico Arena.

Redshirt freshman guard Zach Johnson (Miami, Fla./Norland HS) came up huge when it mattered most as he tallied 17 of his 19 points in the second half and overtime and iced the game with a block of Stetson guard Divine Myles at the rim with five seconds to play. The play earned the top spot on SportsCenter’s Top 10 Plays Sunday night. Redshirt sophomore forward Antravious Simmons (Miami, Fla./VCU/South Miami HS) turned in a career night with 21 points to go along with 12 rebounds while redshirt junior Marc-Eddy Norelia (Orlando, Fla./Tulane/Olympia HS) scored 16 points and was named the A-Sun Tournament Most Valuable Player. 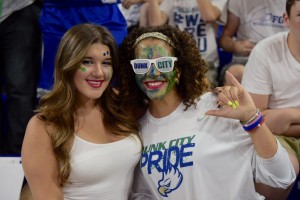 Behind the performances from the FGCU big men, the Eagles outscored the Hatters, 50-28, in the paint as the Green and Blue won the league title without receiving a single point from seniors.

Trailing 35-30 at the half, FGCU quickly tied the score with a five-point spurt to start the last 20 minutes, and the two teams remained neck and neck throughout the rest of the contest. Stetson tied the game at 69-69 with a free throw by Derick Newton with 25 second to play. However, FGCU prevailed in overtime for the fourth time this season en route to claiming the conference crown.

“It was a great college basketball atmosphere,” said third-year FGCU head coach Joe Dooley of the third-largest crowd in Alico history (4,670). “The atmosphere in the building and the fans were off the charts. I’m really proud of our guys for sticking with it. We didn’t have a lot of good things going and couldn’t get stops, but we ground it out, got into a rhythm and pulled it out.”

In only the third A-Sun Championship Final to go to overtime, FGCU turned it on late despite playing the second half without redshirt senior Julian DeBose (Washington, D.C./Rice/St. John College HS) who injured his ankle late in the first half, the final minutes of regulation without fouled-out Demetris Morant (Miami, Fla./UNLV/Bishop Gorman HS) and most of overtime without leading scorer and rebounder Norelia.

It was the Miami duo of Johnson and Simmons that took over as the young guns stepped up on the biggest stage of their careers. Johnson — an A-Sun All-Freshmen Team member — scored 17 points in the final eight minutes of regulation and overtime as the point guard took over by driving downhill and attacking the rim. He also made a potential game-saving play at the end of regulation as he stole the ball from Myles with five seconds left with him driving to break a 69-69 tie.

The victory is the 20th of the year for the Eagles, who have now won 20 games and played in a postseason tournament each of the last four years. FGCU moves its all-time A-Sun Championship record to 11-3, with the .785 winning percentage being by far the best among current league members.