Each day in the United States, more than 1,000 people are injured, and roughly 9 die, in motor vehicle accidents that involve an inattentive driver. A primary cause: cell phone use.

According to researchers, the average American sends and receives about 70 messages and clicks on their cell phone more than 2,600 times a day. Add up all the cell phones in use in the country and that totals about 18 billion text messages per day. 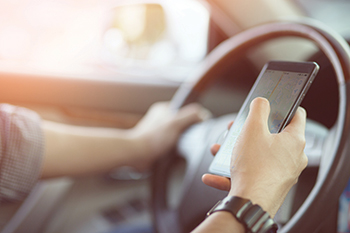 Additional research finds that 56 percent of people make phone calls, 28 percent use social media applications and 12 percent read text messages or emails while driving. Therefore, the typical driver may be unaware of his or her surroundings and so may be slow to react to unexpected roadway conditions. This increases the risk of an accident and places the driver and others around him in danger. So, it is not surprising that distracted driving is one of the leading causes of traffic injuries and fatalities in the United States. This phenomenon costs our economy about $123 billion annually.

These statistics demonstrate that distracted driving is a serious public health concern that deserves everyone’s immediate attention. In an effort to reduce these accidents and injuries, more than 20 states have passed comprehensive laws that prohibit the use of handheld devices for texting, dialing and emailing while operating a motor vehicle.

States that adopted handheld laws experienced a reduction in daily traffic fatalities by as much as 26 percent.

Under this policy, anyone caught using their cell phones while driving may face penalties that range from a fine to being charged with a crime. Some states, including Florida, have implemented less restrictive texting bans (no texting while driving), but may also have special provisions that govern cell phone use in school and construction zones. In general, policymakers believe that laws like these discourage drivers from using their cellphones and may reduce the number of fatalities caused by distracted drivers.

Do laws that restrict cell phone use while driving improve public safety and save lives? Ernest Dorilas, a Ph.D. candidate at Georgia State University, and I tackle this important policy issue by examining the extent to which these handheld restrictions reduce daily traffic fatalities in the United States.

To answer the main question, we used data on the number of fatal motor vehicle accidents each day, and collected information for the states that have implemented this policy between 2000 and 2015. We analyzed this data using a method that compares the trends in fatal accidents before and after these handheld restrictions were enacted. This design enables us to assess the policy’s effectiveness in the short term while controlling for the differences in driving behaviors on various weekdays, months and holidays.

We found convincing evidence that implementing this policy decreases the number of lives lost due to distracted driving each day. More specifically, the states that adopted handheld laws experienced a reduction in daily traffic fatalities by as much as 26 percent. The average state in our sample was able to save about 230 lives each year by adopting these rules. This result suggests that restricting handheld cell phone use may be an effective policy tool in combatting the public health risks posed by distracted driving and would therefore improve public safety.

We are hopeful that this study will inform readers about the significant dangers of using their cell phones while driving. We are equally hopeful that our results will provide meaningful insights that will inform the discussions around the effectiveness of handheld laws and serve as a useful resource for policymakers.

–Nicholas Wright, Ph.D., is an assistant professor of economics in FGCU’s Lutgert College of Business.