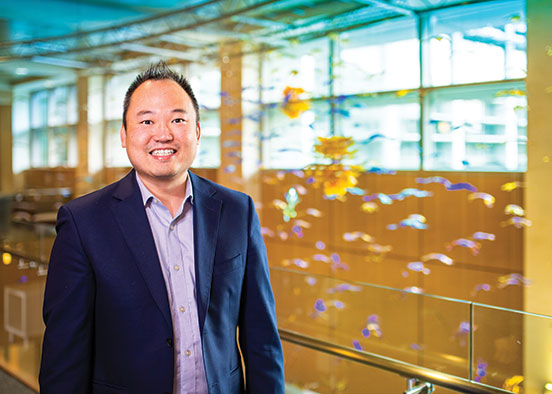 GATHERED BY VIDEO conference one summer afternoon, a dozen FGCU students offered their support to psychology major Becky Rodriguez on the personal essay she was writing for her application for the prestigious Marshall Scholarship.

Terumi Rafferty-Osaki, director of FGCU’s Office of Competitive Fellowships, encourages her, too, but he pushes Rodriguez to read more of the personal statement to the group even as she expresses her discomfort doing so.

Such is the persistent, persuasive impact of Rafferty-Osaki, also affectionately called “crazy man” by his students for his tireless drive and motivation.

In his first year on campus, FGCU celebrated 24 winners and one alternate of prestigious external scholarships and fellowships, a significant increase from previous years.

Those awards include FGCU’s first Fulbright recipient since 2016, its first two recipients of the Goldwater Scholarship and seven winners of Gilman or Gilman- McCain Scholarships.

Such results in some cases put FGCU among or beyond many of the nation’s most tradition-rich universities.

“It’s a hidden gem,” Rafferty-Osaki said. He acknowledged FGCU surpassed even his own strong first impressions when he visited the student union a day before his interview last year, sipping coffee and quietly listening to students’ discussions of weighty topics.

“I could tell there’s a great amount of potential. They want to do great things and really want to make a difference,” he said. “There are higher aspirations and dreams. That makes this job so much more fulfilling.”

The creation of the OCF provided an important service missing while FGCU’s many growth needs took precedence in its formative years.

Rafferty-Osaki, a member of the National Association of Fellowship Advisors, said there are about 400 such offices at schools around the country.

“I’ve felt we had the student talent and faculty talent at FGCU,” said Clay Motley, Honors College director and a key advocate for the OCF’s addition,

“but we didn’t have the system to help produce a strong pool of applicants. That’s what Terumi’s office is doing: creating that pipeline, connecting with students and faculty, raising awareness of these opportunities.”

“I could tell there’s a great amount of potential. They (the students) want to do great things and really want to make a difference. There are higher aspirations and dreams.”
TERUMI RAFFERTY-OSAKI,
DIRECTOR OF FGCU’S OFFICE OF COMPETITIVE FELLOWSHIPS

Many of Rafferty-Osaki’s tasks his first year were largely promotional: meetings, emails and other outreach with students and faculty across campus. But as with any good coach, his most important role came in helping FGCU students believe in their ability to compete for and win prestigious honors.

Mesa, who said the first application she submitted for the Fulbright the year prior to Rafferty-Osaki’s arrival was a far cry from her successful entry, likened the bulk of her meetings with him to “therapy.” She, too, struggled with what Rafferty- Osaki calls “imposter syndrome.”

“He was the first to recognize that and kind of shake me out of it and say, ‘Carolyne, you are beyond capable, and you are a real candidate for some of these awards,’” she said. “Fulbright fellows usually are from Yale or Harvard. When he said I could be on that stage, it was something I never dreamt I could do.”

Rafferty-Osaki stressed that the OCF, housed within the Honors College but open to all FGCU students, exists not just to win awards. The volume of work and personal reflection that goes into the application process benefits students regardless of the outcome.

“It’s a transferable skill,” said Rafferty- Osaki, who saw nearly half of the 75 students he worked with his first year come from outside the Honors College. “It takes a lot of courage to put yourself out there for any one of these.”

Critical in producing impactful personal statements, or “hero stories,” as he calls them, is the trust and rapport he develops with students.

“The first time I cried on campus was at Terumi’s office,” said economics major Roxana Ruiz Rodriguez, an Estero High School graduate and first-generation Cuban-American who won a Killam Fellowship. She is interested in pursuing constitutional law or economic policy.

“We were talking about something from my personal statement. I thought it was a way to list a long resume. He helped me understand it’s more of a story and really going into why you’re doing what you’re doing. It’s about being able to be vulnerable. I just want to help other students like me.”

But his first lesson in making the world a better place – and helping students do the same – came from his adoptive mother, a public school social studies teacher for 33 years and the inspiration for the “Tiger mom” phrase he uses to describe his own approach with students.

“There are always going to be people in the world who are less fortunate, and it’s our responsibility to uplift everyone,” Rafferty-Osaki said. “You learn the idea that you really have to be the change you want to see in the world.”

Rafferty-Osaki already has plans to expand the reach of the OCF. He is developing a mentoring program, known as Project Narrative, to connect FGCU students with area high school students who might not otherwise have visible mentors in applying for college.

His office is adding a graduate assistant this year, with a coordinator position pending down the road.

“It’s really added to our ability to help FGCU students have those life-changing opportunities and experiences,” Motley said. “FGCU is the kind of place where these things are possible.”