As a student in the late Professor John Herman’s general ecology course, Uzair Iqbal (’16, Environmental Studies) sometimes found himself knee-deep in swamp water alongside alligators. The experience was a bit nerve-wracking, but it made a lasting impression.

“Professor Herman believed it was important for us to get out of the classroom to see and understand what we were actually studying,” Iqbal says of the FGCU assistant professor of biology who died in July. “He taught me that not everything should be learned from books – you also need to get your hands dirty.”

Iqbal has carried that lesson into his professional life. In fall 2016, he completed the research internship he had started at FGCU’s Kapnick Center at the Naples Botanical Garden the previous fall, then returned to his hometown of San Antonio, Texas, to accept a job with the city’s Solid Waste Management Department. He now serves as the Recycling Coordinator for ReWorksSA, the department’s commercial recycling division, helping apartment complexes and businesses in their recycling efforts.

Happily, he notes, much of his time is spent out in the field. “I check businesses’ recycling best practices when they apply for the ReWorksSA Recycling Certification and assist apartment managers, owners and their residents with recycling initiatives,” Iqbal says.

Last summer, Iqbal decided to dive into a different type of field work. He returned to his family’s native country of Pakistan for an eight-week fellowship with the American Pakistan Foundation (APF), an organization dedicated to leveraging the knowledge and resources of Pakistani Americans and friends of Pakistan to strengthen civic, political and socioeconomic ties between citizens of both nations. 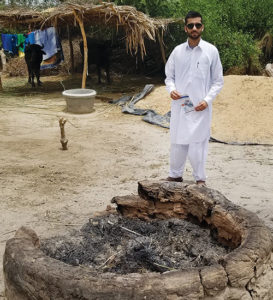 One of only nine fellows selected from a group of almost 100 applicants, Iqbal worked in the Water, Immunization, Sanitation and Education (WISE) program of the National Rural Support Programme, a non-government organization that has been active in rural development issues in Pakistan since 1993. His goal: to help villagers improve their sanitation systems.

“The rural population in Pakistan is extremely poor, so I decided to survey villages in the Sindh and Punjab provinces about the challenges of their sanitation systems,” says Iqbal, who concedes it was an eye-opening experience. “It’s tough to ask people to focus on sanitation when they have no toilets or electricity and their children suffer from lack of immunizations, education and water.”

Yet Iqbal says the fellowship was gratifying as well. “When I studied with Assistant Professor Brian Bovard at FGCU, he taught me the importance of systems-thinking,” Iqbal says.” Rather than accepting a general answer, he always pushed me to dig deeper. Working in the field, I saw firsthand how vital it is to understand that everything is connected – problems don’t exist in isolation.”

Bovard, an assistant professor of environmental studies, says, “I interacted with Uzair in a number of different capacities during his time at FGCU. I had him in several classes, worked with him on his senior research project, and travelled to the Dominican Republic with him as an advisor to the Dominican Republic Outreach Program. In every instance, he was as committed to the experience as any student I’ve encountered. Uzair is passionate about environmental issues, and when he’s engaged in something, he’s all in.”

Now, he’s taking what he learned at FGCU – sometimes the wet and dirty way – to help his native country.

“If it weren’t for the experiences and education I received at FGCU, I can definitely say that I would not be where I am in my professional career now,” Iqbal says. “Once an Eagle, always an Eagle!”