It was a trifecta of happy events celebrated at this year’s sparkling President’s Gala at The Ritz-Carlton Beach Resort.

Close to 400 people gathered in their black-tie best April 8 to celebrate the enormous community support demonstrated by the fact that the $100 million campaign has been met and exceeded. They showed their appreciation and support of President Wilson G. Bradshaw as he concludes a decade of leading the university. And they paid tribute to the fact that the university marks its 20th year in existence and all that it has accomplished in such a short time.

As he presided over his last gala in front of a ballroom filled with donors, alumni, faculty, staff and friends, President Bradshaw thanked everyone and said, “It has been an honor and a privilege to be your president for the last 10 years. My pledge to Florida Gulf Coast University was to give you my best day in and day out and I’ve tried to do that.”

A highlight of the evening was the establishment of the Wilson G. Bradshaw Student Success Fund, which will provide scholarships and support the many elements vital to student success. Guests were invited to pledge gifts to the fund and more than $400,000 was raised. 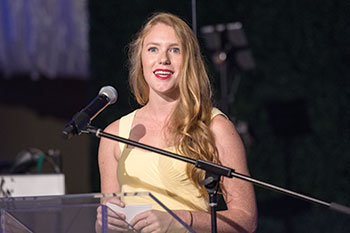 Charles Winton, former chair of the FGCU Foundation, said of Bradshaw, “Your steady hand guided us through half of our
life (as a university). Over the last 10 years, the number of students living on campus has doubled. The number of degrees has doubled. You took us to Texas Stadium for the Sweet 16. You have been the biggest cheerleader to our student-athletes. You have been committed to diversity and to the community.

“You put people before politics and your own self-interest. Like a true
eagle, you always soared above the fray. Your legacy is that of being a true servant to Southwest Florida.”