FGCU striker Albert Ruiz has solidified himself as one of the three best players in college soccer by being named a finalist for the 2016 MAC Hermann Trophy, college soccer’s equivalent of football’s Heisman Trophy.

Ruiz of Barcelona, Spain, is one of three finalists, along with Wake Forest midfielder Ian Harkes and Maryland forward Gordon Wild. The national leader in goals (22) and points (49) by a wide margin, Ruiz has been extended an invitation and is expected to be in attendance when the winner is announced Friday, Jan. 6 at the 2016 MAC Hermann Trophy Banquet at the Missouri Athletic Club in St. Louis. 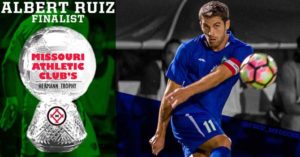 The most coveted individual honor in Division-I soccer, the MAC Hermann Trophy has been awarded annually since 1967. The finalists were determined based on voting by D-I coaches. A National Soccer Coaches Association of America First Team All-American — the first in the Atlantic Sun Conference since 1997 — Ruiz was one of 15 semifinalists announced late last month.

The junior business management major is the first player in ASUN history to be named a finalist (or semifinalist) for the Hermann prize. Ruiz scored five more goals and totaled nine more points than any other player in the country this season.  By himself, Ruiz scored more goals than 74 teams — more than one-third of the 203 D-I men’s programs — and secured more points than 43 teams.

“What an absolutely incredible honor not only for Albert, but for his family, our program, the entire university and the ASUN Conference,” said FGCU program-founding head coach Bob Butehorn. “He’s deservingly earned an opportunity to be selected as the best player in college soccer, and it’s so rewarding to see all of his hard work pay off. Albert is a great ambassador for the sport of college soccer, and is someone who perfectly exemplifies what hard work and dedication can accomplish.”

Ruiz was also lauded as the ASUN Player of the Year, selected as the ASUN Tournament MVP and was named an ASUN First Team and ASUN All-Tournament Team member while leading FGCU to the NCAA Tournament Second Round for the first time.

“It’s truly an honor for me to represent this amazing school throughout the country and around the world,” added Ruiz. “I’ll be forever thankful for everything I’ve received here at FGCU. I can’t thank my teammates, coaches and FGCU community enough for helping make this happen.”

The Spaniard’s 22 goals are the most by a D-I player in a single season since 2012, and the most in the ASUN in more than a decade. He helped guide FGCU to its fourth ASUN Championship title in just six seasons of D-I postseason eligibility.