One doesn’t expect to find cutting-edge research on how wetlands can improve water quality being done in the heart of Naples, at a Collier County bog bordered by heavy vehicle traffic on Golden Gate Parkway to the immediate south and the hustle and bustle of Coastland Center mall and Naples High School within a stone’s throw to the west.

Welcome to Fred W. Coyle Freedom Park in Naples, a 50-acre wetland oasis at Golden Gate Parkway and Goodlette-Frank Road just off U.S. 41 that was two years in the making and opened in 2009 as an urban swamp designed to catch and filter stormwater as it flows toward Naples Bay and the Gulf of Mexico.

We know the wetland park is visitor-friendly, a place where people can bring their picnic baskets, leashed dogs and fishing rods while exploring a 2,500-square-foot educational facility, walking trails and about 3,500 feet of boardwalk winding through restored wetlands, native vegetation and wildlife.

But how’s the swamp built on the doorstep of high society doing as a catch basin and filter for stormwater runoff?

Enter Dr. Bill Mitsch, eminent scholar and director of FGCU’s Everglades Wetland Research Park at the Kapnick Center at the Naples Botanical Garden. Besides being one of the world’s top wetland experts, Mitsch is quite familiar with the design of Freedom Park in particular. It’s what he calls a “knockoff” of the 50-acre wetland park he built and studied in Columbus, Ohio — the Olentangy River Wetland Research Park — during a three-decade career at The Ohio State University.

“I did not know about (Freedom Park) when I was interviewing at FGCU, so I was quite pleased when I moved to FGCU to find it right in my backyard,” said Mitsch, who said he was lured here in 2012 because of the university’s proximity to the wetland mecca of the southern U.S. — the Florida Everglades.

Now, Mitsch and his team — which includes Dr. Li Zhang, assistant director of the Everglades Wetland Research Park, along with FGCU graduate students — are putting Freedom Park to the test. In a first-ever collaboration with Collier County, the FGCU water researchers have dived into a two-year, $50,000 study to monitor the progress and effectiveness of the wetland park in cleaning pollution from urban runoff during the rainy season. They will analyze water levels, vegetation and phosphorus and nitrogen content, and make recommendations moving forward at the conclusion of the initial two-year analysis, which, by the way, Mitsch hopes will then be extended into a long-term deal between FGCU and Collier. 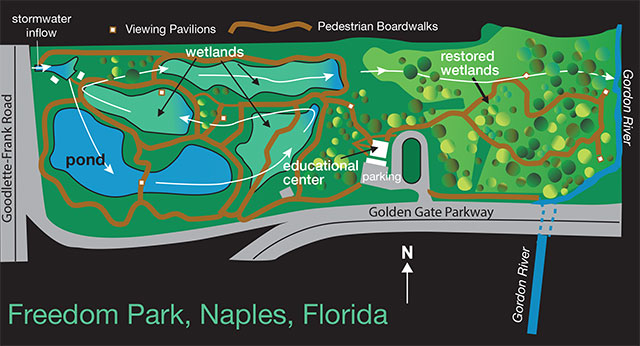 In remarks to a crowd of about 100 gathered Nov. 17 at the Freedom Park education center to celebrate the new FGCU-Collier partnership — a gathering that included Collier and city of Naples officials along with FGCU representatives, students and other invited guests — Mitsch quickly grabbed the crowd’s attention with a dramatic statement:

“This is potentially one of the great wetland parks in the United States.”

No small statement coming from a guy who literally wrote the book — actually, four of them — on wetlands, the most recent a fifth-edition update of his “Wetlands” volume with co-author J.G. Gosselink.

Talking about Freedom Park in particular, Mitsch pointed out that “these wetlands are cleaning up the urban runoff from Naples, helping to protect the Gordon River and Naples Bay from the awful algal blooms that have been in the news elsewhere in South Florida this past summer.”

After the ceremony, Mitsch, Zhang and two of the environmental studies graduate-student researchers on the project — Lauren Griffiths and Taylor Nesbit — gave tours of the scenic park, which offered a diverse display of Southwest Florida waterfowl and native vegetation that complements the site’s ecological function: to collect stormwater inflow at a 5-acre catch pond and, through gravity, filter that water through three separate wetland areas before recycling it to the Gordon River.

Mitsch also told the crowd about another related project for which he’s seeking funding that would essentially be the next step in the new wetland evolution: recycling the filtered fertilizer elements. But that’s another story. The celebration was about how far we’ve come in our handling of excess seasonal water.

“Water is our new oil, and we really have to preserve it,” said Penny Taylor, Collier County commissioner for District 4, who was quick to deflect credit for Freedom Park to her predecessor, Fred Coyle, a former commissioner who championed for it and for whom it’s named. “When you have projects like this, and leadership behind it, it’s going to change everything.”

As a point of comparison during her speech, Taylor recalled the naivety of previous attempts to deal with rainy-season runoff, such as spreading around water-sucking, invasive melaleuca. “So we’re not dropping melaleuca seeds from planes today,” she said. “We’re building wetland parks. And I hope we have some more.”