H
College of Arts and SciencesCollege of BusinessEngagementFaculty and StaffGiving 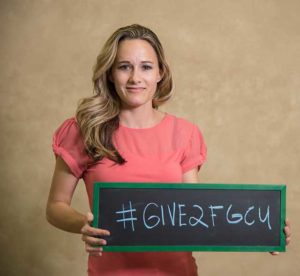 The one-day fundraiser – which is expected to become an annual event — was an effort to build enthusiasm and giving among the growing alumni base as well as faculty, staff and the many members of the community with ties to the university.

A $1 million gift came from a donor who wishes to remain anonymous but wanted to make an impact. Also donating was Peter Cuderman (’11, Legal Studies; ’13, MBA), who served as both a president of Student Government and a member of the FGCU Board of Trustees. He surprised his parents by establishing an endowed scholarship in their honor.

“I saw the Florida Gulf Coast University Give Day as an opportunity to give back to an institution that has given me the world,” said Cuderman who is the chief strategy officer for Tri-Town Construction. “The Dr. Bart S. and Peggy I. Cuderman Endowed Fund, named in honor of my parents, will provide scholarships to help students who have overcome major life obstacles.”

Of the 207 gifts received, 180 were made online, the largest number ever in one day. “Although we have a relatively young and smaller alumni population, their support of FGCU continues to grow year after year. We are blessed to have such great supporters for our students, faculty and programs,” said Chris Simoneau, vice president for Advancement and executive director of the FGCU Foundation. “They understand the positive impact this institution makes upon the region and its residents and realize that their support helps to fortify that effort.”

Tags: Board of Trustees, student government