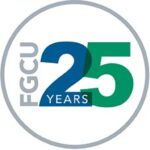 As Florida Gulf Coast University heads into its second quarter-century, there is much to celebrate: a thriving institution educating 16,000 students, almost 40,000 alumni, a distinguished faculty and a sustainable campus.

FGCU has become an influential force in Southwest Florida, contributing nearly $600 million annually to the region’s economy. It has created a robust workforce of teachers and healthcare professionals, engineers and entrepreneurs,  social workers and scientists.

The Daveler & Kauanui School of Entrepreneurship ranks among the top such schools in the nation, and Marieb College’s School of Nursing is the best in the state. The Water School at FGCU focuses on critical issues such as climate change, natural resources and ecosystem health.

Its athletics teams have captured 87 conference and tournament titles in 14 years of NCAA Division I competition. Its musicians, artists and actors enhance the region’s rich cultural fabric.

But there’s no resting on laurels; FGCU isn’t done yet.

“We’re celebrating the past and getting a jump start on our future,” says Kitty Green, vice president for University Advancement and executive director of the FGCU Foundation.

To that end, the university has launched a $75 million comprehensive fundraising campaign.

“What has been accomplished in the last 25 years is truly remarkable, but we are just getting started,” Green says. “There are so many exciting possibilities ahead for this university.”

There are plans to make WGCU Public Media, already a powerhouse for news and great programs, an even more robust organization, with expanded local programming for both radio and television.

Given that the majority of FGCU students stay and build their careers in Southwest Florida, investing in the university’s future is an investment in the region as well.

Here are highlights of the comprehensive campaign goals:

» Honors College: The college for high-achieving students has grown from 532 students in 2015 to 1,250 this year. Goals for the campaign include relocating the college to the Wilson G. Bradshaw Library, where the student experience will be much improved and staff will have badly needed office space. There are several opportunities for supporters to name offices as well as the college itself.

» Marieb College of Health & Human Services: Considering that Southwest Florida has a large population of older residents, it’s a prime place to serve as a living laboratory for researching and fulfilling their needs. Marieb College is well-positioned to provide a holistic approach to successful living that could become a model for communities around the nation. In addition to producing more of the healthcare providers that are so desperately needed, it aims to create an institute to study and implement ways to enhance aging, care delivery and quality of life.

» Library renovation: The Bradshaw Library is among the original buildings on campus and while it has been upgraded over the years, it is now in need of retrofitting to keep up with the high-tech needs of today’s students. Planned upgrades include: the creative commons, a workspace where students from various disciplines can work alongside one another on projects involving video and audio production, robotics, 3D scanners and printers and other such equipment; a research commons, where important research and scholarship produced across the university can be stored in an accessible space; and an expanded area for archives and special collections, which has a significant number of priceless collections but needs additional climate-controlled space and secured vaults.

» Bower School of Music & the Arts: The school brings more than 150 events to the region annually and educates the performers, artists, music therapists, teachers and actors who share their talents with the community. Expanding the Music Building with more rehearsal and classroom space will allow FGCU to grow this very successful program. Eventual designation as a museum and the growth of a museum studies program will be possible if FGCU is able to expand the Wasmer Art Gallery with the addition of larger exhibit areas and storage capacity.

» Endowed faculty: Academic excellence begins with an investment in outstanding faculty. Providing the means to create endowed chairs will assist in recruiting the most outstanding national and international leaders in their academic disciplines to become members of the FGCU faculty.

» Scholarships: At least 60 percent of students at FGCU work at least 20 hours a week in order to afford their education. Scholarships, paid internships and stipends make a tremendous difference, allowing students to focus on their studies and take part in college activities and, in many cases, to be able to attend college at all. The need continues to grow. Not only does it help students while they are in school, it gives them a better start when they graduate with less debt.

» Community Autism Network: This is an interdisciplinary training resource and research collaborative based in the Colleges of Health & Human Services, Education and Arts & Sciences. The goal is to enrich the lives of those on the autism spectrum, their families and the agencies that serve them by expanding the programs offered at FGCU.