You remember in “The Big Lebowski” when Walter tells his bowling buddy, “Donny, you’re out of your element!” On the afternoon of June 16, 2017, I entered the Ritz Paris feeling a lot like Donny.

Not only because Coco Chanel, Marlene Dietrich, F. Scott Fitzgerald and Cole Porter have numbered among the guests of this luxurious hotel; or because the nightly rates of even its standard rooms were staggering compared to the cost of my modest Airbnb across the Seine. As the news coordinator for the Hemingway Society, I was there to interview someone. I had never interviewed anyone, really, much less someone like Colin Field, the head bartender at the Ritz’s Bar Hemingway, a man often ranked as the best bartender in the world. When he had agreed to this meeting, you could have bowled me over.

This was one of the places Hemingway had famously “liberated” from the Nazis upon his arrival to Paris toward the end of World War II. It was also the place where, in late 1956, two large trunks filled with some of Hemingway’s long-forgotten Lost Generation writings found their way back into his possession, a serendipitous event that led him to write one of the most celebrated books about Paris, “A Moveable Feast.”

That evening, Field generously discussed the bar’s history, his rise as a bartender, and his love of Hemingway, as we walked around pointing out memorabilia adorning the walls. A month later, I posted the transcription of our interview to the Hemingway Society website, but something nagged. Try as I might, the transcription wasn’t conveying enough. 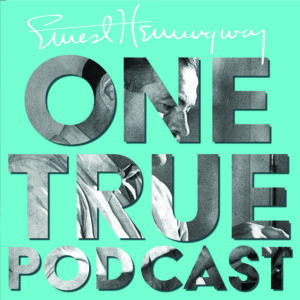 The back-and-forth of dialogue, the hesitations and laughter, the ambient noise were all missing from the written version but still resided on the poorly recorded voice memo of my iPhone. Although that audio would never have met quality standards for something like a podcast, I soon realized that the podcast form was, in essence, what I was after.

What we were after, actually. By early 2019, I had gotten wind that a colleague and friend, Mark Cirino from the University of Evansville, was on a separate mission to create a podcast. Deciding to embark on a joint venture that would hopefully reach not only Hemingway scholars and devotees but also students and general audiences, we created “One True Podcast,” a show that focuses on Hemingway, his work, and his world through conversations with scholars, artists, political leaders and other luminaries.

He’s talking about listening in order to become a better writer, maybe also a better person. Like novels and short stories – and sometimes unlike films – podcasts can carve out intimate spaces for people to listen in, listen with and listen to each other. With more than 35 episodes released to date, and many more recorded and waiting in the wings, we’ve worked and continue to work at the art of listening and invite audiences to do the same.

Guests have included Hemingway’s secretary and daughter-in- law, Valerie Hemingway, on meeting him for the first time in Spain in 1959; his grandson, Seán Hemingway, on editing a new volume of “The Old Man and the Sea”; home improvement guru Bob Vila on his upbringing in South Florida and Cuba and his work heading up the restoration of Hemingway’s Havana home; Ken Burns and Lynn Novick on their new documentary “Hemingway”; and Mark Salter, senior advisor to John McCain, on the late senator’s deep appreciation of Hemingway.

In “A Moveable Feast,” Hemingway would declare, as much to himself as to us, “All you have to do is write one true sentence. Write the truest sentence that you know.” On the podcast, we play a “one true sentence” game by asking guests to share the sentence they find most significant from Hemingway’s writing. It’s a fun organizing principle that has led to insightful conversations with writers and scholars.

Joshua Ferris, PEN/Hemingway Award winner for his novel “Then We Came to the End,” landed on maybe the most famous line from a Hemingway novel. “The Sun Also Rises” ends with the war wounded protagonist asking the female lead, “Isn’t it pretty to think so?” For Ferris, that sentence not only encompasses everything these characters have lost and probably never even had but also “almost necessitates that [the reader] start over again. It’s so good.”

Hemingway was great at writing endings. I’m not even going to compete on that front, and our show doesn’t really need to, anyway. It’s episodic rather than serial, gaining by accumulation. Like snow. After two years of this work, we’ve thankfully accomplished only a dusting.

– Dr. Michael Von Cannon teaches American literature and composition at FGCU. In addition to being co-creator and producer of “One True Podcast,” he is co-editing “The Letters of Ernest Hemingway: 1957-61” as part of the Hemingway Letters Project.