The Way We Were

Many believe Florida Gulf Coast University first made its mark on a national stage when the 2013 Dunk City men’s basketball team captured the hearts of sports fans everywhere with a remarkable March Madness performance.

But that isn’t exactly true. 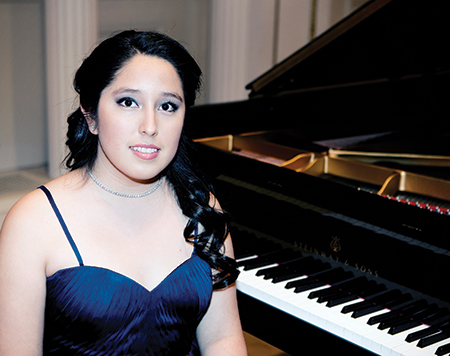 On March 7, 2013, FGCU piano student Priscila Navarro (’15, music performance) showed the performing-arts world the potential of what was then the Bower School of Music (now Music & the Arts) on the concert stage at hallowed Carnegie Hall when she presented a solo recital. The appearance was the culmination of a triumphant series of state-, national- and international-competition wins that began in 2011 for Navarro, including the International Chopin Competition in Texas, which earned her the spotlight in New York City.

“My Carnegie Hall recital debut was a milestone in my pianistic career,” said Navarro, 26, reached by FGCU360 as she prepared for the pandemic-postponed Liszt International Competition in The Netherlands. It’s been rescheduled for November 16 through 22, and she is just one of 14 pianists worldwide to qualify.

“As a child growing up in a small province of Peru, becoming a pianist seemed a far-off dream for someone of my limited resources,” she said. “When I discovered classical music and entered the conservatory at age 9, I realized how difficult the path would be for me, and yet I decided to take the challenge. I was fortunate to have wonderful teachers who understood the importance of mentorship.

“When I entered FGCU at age 16, I could not have imagined that in only two years I would be fulfilling a dream of many young pianists,” Navarro said. “Performing a full recital at Carnegie Hall as part of a prize at an international competition is an important achievement for a student from any musical institution. The fact that our music school was so young was only a further reason for pride and satisfaction in the work that the FGCU members had achieved. My triumph was shared with teachers, sponsors, supporters and friends, many of whom traveled to New York to encourage me.”

No supporter was greater than her mentor and still collaborator, Michael Baron, the Myra and Van Williams Distinguished Professor of Music and head of keyboard studies at FGCU.

“Priscila’s Carnegie Hall solo recital was very important to both Priscila and to the Bower School of Music,” Baron said. “We have had a huge amount of successes in our young life, but one of the difficulties of beginning a new school is getting your name out. We are all very proud of Priscila’s continuing successes since that time.”

Navarro’s continuing successes include a graduate degree from the Frost School of Music at the University of Miami, resident artistry with the South Beach Chamber Ensemble, and presenting solo recitals, major chamber works and a large selection of concerti with orchestras throughout the United States, Europe and South America. Those performances include appearances with Baron, who Navarro usually joins at FGCU’s U. Tobe Recital Hall every year as part of the Nisita Concert Series, and with whom she has some recording projects planned, although they have been delayed by the pandemic.

But all that subsequent glory in a classical-music career yet to reach its crescendo began with a memorable March 2013 concert in which Navarro set the stage for FGCU, handing out an early assist to the basketball thunder that would follow. As Baron put it:

“The combination of Priscila’s competition win that resulted in the Carnegie Hall recital and the Dunk City’ publicity happening at the same time made national news, which proved invaluable to show the world that we were developing a world-class school of music.”