“Where did I leave my keys?”

This conundrum is not only common, but potentially immobilizing. Whether it’s starting the car or unlocking the home or office, our keys are among our most important possessions.

Of course, technology has replaced many old-fashioned metal keys, giving us elaborate, electronic ways to unlock our lives. But we still need to hang those fobs and mini swipe cards somewhere. That’s where keychains and lanyards come in. Not only do these accessories carry the keys to our daily existence, they often carry memories we love to lock away. 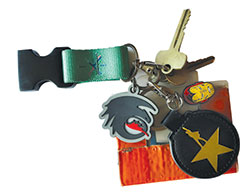 Senior Emily Bernard uses orange duct tape to preserve the Eagle ID card she was issued her freshman year in 2014. It’s attached to a lanyard she got in Portland, Oregon, that’s fashioned with a pattern inspired by the carpeting in that city’s airport (which has a cult following and a Wikipedia page). Her three keychains represent “each of my favorite fandoms.” 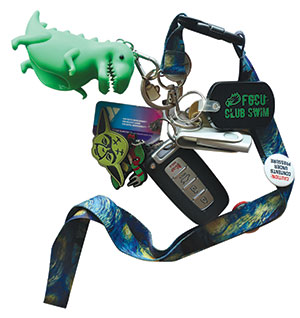 “The one on the left is the Strike Class symbol from ‘How to Train Your Dragon,’ said the Palm Harbor native majoring in integrated studies. “The large leather black one is from ‘Hamilton: An American Musical,’ which I finally got to see this summer in Kansas City. And last but not least, a classic Iron Man, my favorite character in the Marvel Cinematic Universe. This keychain was given to me by my friend and former roommate my freshman year, and has been with me ever since.”

Artist Vincent Van Gogh’s “Starry Night” appears on the lanyard of Kaitlyn Hynoski, a senior art major. “This is one of my favorite paintings and a constant self-reminder of my passion for art,” said the Spring Hill resident. Other meaningful attachments are a keychain for the FGCU Swim Club, of which she’s a member; a dinosaur gifted to her by a friend; a tiny Yoda keychain because she’s a “huge Star Wars fan,” and “some buttons pinned to the lanyard that I collected over the summer on a study abroad trip to Denmark and London.”

It’s hardly surprising that Orlando native Eric Loya, a junior digital design major, proudly hangs a Walt Disney World lanyard from his neck. “I always seem to have it on me in any picture,” he said. “I feel it adds character. It’s Disney, and many people know I’m an avid Disney fan, so I feel I’m always wearing a part of that.” 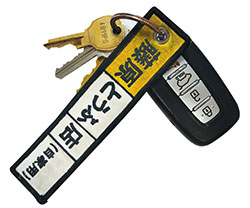 Leah, an art major from Myakka City, carries a fabric patch that says “Fujiwara Tofu Shop” in Japanese that was given to her by one of her best friends. “It’s from one of our favorite animes, called ‘Initial D,’ which taught me a lot about being confident in myself and remembering it’s about how I do things, and not how everyone else does them.”

Mia’s softball heart charm on her FGCU lanyard was presented to her on Senior Night for her fastpitch team at Western High School in Davie, for which she wore No. 17. “I carry the keychain because it means a lot to me, and it reminds me of the time I spent playing not just high school softball, but playing for my travel team (Pines Thunder),” said the political science major, who also keeps her earbuds on the chain for easy access.

Kaitlin Connor’s lanyard is “something super special to me because this is the first year I have a car!” the Fort Lauderdale resident proudly exclaims. “I love supporting local businesses, so I ended up purchasing my keychain from a lady who handmakes all of her designs.” The senior digital media design major also packs a canister of pepper spray she got in a giveaway at the FGCU Bookstore. “I really appreciate the thought behind that, and I’m thankful that I’ve never had to use it.” 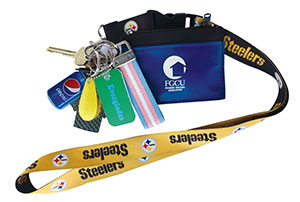 A junior majoring in public health asked to share his object of affection anonymously as a transgender man who has yet to come out to his family, but which explains the transgender flag swatch attached to his Pittsburgh Steelers lanyard. “I am from St. Petersburg, but I have a Steelers lanyard because I’m a huge fan,” he said. “My mom is from Pittsburgh and most of her side of the family still lives there. Go Steelers!”

For Jordan Brown, a senior digital media design major, her standard FGCU lanyard with the eagle logo is a personal badge of honor. “It was a gift from my father, who was so excited when I was admitted to FGCU,” said Jordan, a Sarasota resident who goes by the nickname Jaz. “He insisted on buying me a bunch of really cool FGCU merch.”