In support of public media

It takes a village to keep multi-faceted stations thriving 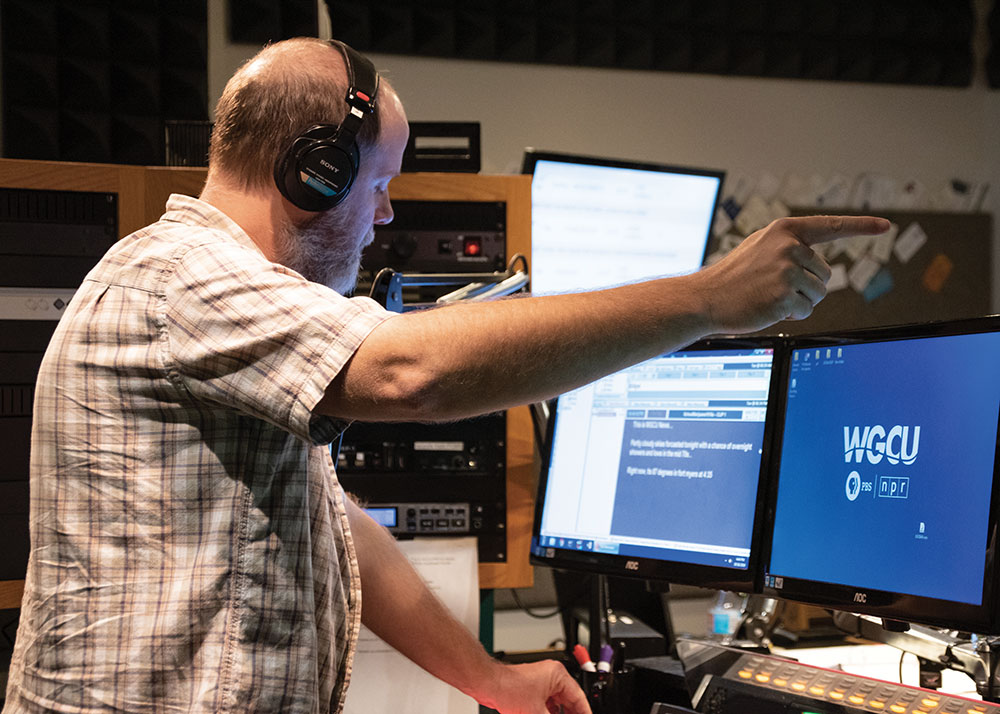 ABOVE: Producer Mike Kiniry makes anon-air appeal for pledges during WGCU FM’s recent fundraiser.Imagine if you could decide how much you would pay – or whether you’d pay at all – for your internet service. Or your television provider. Or your newspaper and magazine subscriptions.

All of those companies charge a set monthly fee. You pay it or your service ceases. And, on top of that, every one of those for-profit services comes with a boatload of advertisements or commercials. And then imagine what would happen if only 2 percent of users decided to pay up. How long do you think those companies would remain in business?

That’s the situation that WGCU, the market’s lone nonprofit media company faces. The member-supported service of Florida Gulf Coast University imposes no set fee for its 24/7 radio and television programming. It runs a modicum of sponsor messages, but no commercials. It does not answer to investors.

Decisions about news and entertainment are based on what viewers – aka supporters – tell the station they want.

That’s the public media model, the one that’s worked for decades, including the 36 years that WGCU has been Southwest Florida’s trusted source for news, cultural programming and civil discourse.

But keeping that quality high and the program schedule filled still takes money. And so the fundraising must go on. Here are some of the ways WGCU Public Media keeps its many programs and projects going.

“Pledge” takes place about eight times a year, four each on the radio and on television. Public media watchers and listeners know that it’s the time when staff members and volunteers break into TV and radio shows to remind people that it is a nonprofit business dependent on donations. Staff members and members of the public who volunteer ask for pledges throughout the days of the pledge drive. These sessions run from 7 a.m. though 6 p.m. each day, involving dozens of people who take time from their busy schedules to lend a hand.

The team has tried hard in recent years to minimize program interruptions with campaigns such as “Radio Uninterrupted,” which uses testimonials from listeners and other abbreviated tactics to encourage donations in lieu of the standard on-air pitches.

Those who work there are understandably proud that WGCU TV has the greatest market penetration of any public television station in the country – 84 percent of all households in the coverage area – but while people watch, only 2 percent of households supported the station in 2018.

If another 2 percent of households were to contribute $10 a month, the TV and radio stations could cut back dramatically on the time spent raising money.

But getting on the air to cajole listeners one by one into becoming donors seems to be the public media model. Hence, the tradition continues.

Where does the money go? Although public may be in the name, the lion’s share of funding does not come from the government.

Pay to play it

As is the case with all public media stations, WGCU pays to air the national programs listeners enjoy.

For instance, radio programming fees due to American Public Media, Public Radio International, WNYC, NPR and Public Radio Exchange topped $485,000 in 2018. That covered the cost of shows such as “BBC World Service,” “Science Friday,” “This American Life,” “Splendid Table,” “Reveal,” “All Things Considered” and the other shows not produced locally.

Fees are based on a region’s population and, hence, the number of potential listeners – not the actual number who listen. So as the population increases, so do fees. With 1,000 people a day moving to Florida, the potential audience increases and, fees rise as well. Obviously, the idea is to encourage stations to increase membership accordingly.

Considering that membership is available for as little as $5 a month, the radio and television programming, learning workshops, online news and games, podcasts, emergency alert services (see below) and other membership benefits are a bargain.

And memberships are critical to the station considering not only the programming costs but the money needed to fund overhead, equipment and assorted expenses. As a result, WGCU has a major fundraising job on its hands every year. Beyond the national programming, there is a great deal that costs money that isn’t readily apparent to listeners and viewers.

As part of the Florida Public Radio Emergency Network, WGCU FM remains on the air before, during and after a weather or other emergency to keep residents in the listening area informed, even during power outages elsewhere. That means commercial stations rely on the station as well for up-to-the-minute information from public media stations around the state, including WGCU.

The station’s staff works with the Florida Division of Emergency Management and local emergency operations centers to broadcast information about preparation, storm trajectory, shelters, recovery operations – everything residents need to know in the event of a serious storm.

Storm preparation information is available on the website at wgcu.org/beprepared as well.

Friends of the donors

Even when grant money is awarded for a project, there are associated costs the station absorbs.

To offset some of this, Donor Relations Specialists Gina Dengler and Jennifer Denike help make friends for the station. They get to know donors and potential donors and help them determine what sort of legacy they might want to leave for future generations. Sometimes a donor’s passion for things like nature, or the Seminole tribe, or any number of disparate causes has an obvious match in an upcoming program at WGCU, or at FGCU.

Sometimes WGCU donor relations specialists partner with financial planners and lawyers to present a program for potential donors that explains ways to support WGCU they may not have considered. Those sums can come in the form of a life insurance policy, annuity, certain kinds of 401Ks, a trust, or by designating a checking or savings account.

“Everyone has something they want to accomplish,” Dengler said. “Our job is to see where WGCU fits into that.”

Donors of $2,500 or more are members of WGCU’s Leadership Circle, and are invited to special events throughout the year.

With more than 350 public television stations in the United States reliant on federal funding, some meeting of the minds is necessary when it comes to dividing limited funds. Advocates meet with legislators to ensure that funding continues for those agreed-upon goals.

Each February, members of the nonprofit America’s Public Television Stations meet in Washington, D.C., to determine funding priorities. For a decade,  U.S. public media has shared $445 million annually. Earlier this year, APT stations asked for – and received – $495 million, the first increase in 10 years. That $50 million increase should put stations at the funding level of a decade ago in today’s currency, said WGCU General Manager Rick Johnson.

Development, events and underwriting by companies account for about $4 million of the station’s budget each year

Public broadcasting does not sell advertising. Companies buy air time on radio or TV as short announcements of support for the station, its mission or a current focus or effort.  They also may sponsor programs or screenings by underwriting the cost in full or part.

WGCU does a significant number of “tradeouts,” or in-kind agreements with local media companies. For instance, WGCU publishes the next month’s TV schedule highlights in several local publications in exchange for TV or radio announcements of equal value to be used by those publications.

About those educational programs

Surveys of parents have shown for more than a decade that they trust PBS Kids programming above that of all other networks. And for the past few years, the addition of a 24/7 channel just for kids has made that programming available at all hours.

Public television is known for delivering educational programming onscreen, but some also takes place in person. Over the past year, WGCU’s outreach team has conducted workshops for teachers and parents on how to employ specialized curriculum, PBS LearningMedia, to supplement classroom lessons.

Exercises and educational games based on PBS characters are abundant through apps and the WGCU website as well.

PBS is onboard with the movement of a good portion of the U.S. viewing audience from multi-channel subscription services to an in-demand model.

Available to all WGCU members who donate at least $5 per month is PBS Passport, a streaming platform with thousands of hours of public television programming – local and national – that can be accessed on demand through a smart TV, smartphone or tablet.

Other benefits provided by WGCU include the Radio Reading Service, which brings printed materials to those who are visually or physically impaired via a special radio broadcast; podcasts, including “Three Song Stories,” biographies told through music; trips to concerts and places of interest around Florida; and an app for your phone so that you never have to be without the programs you love.

There’s far more than meets the eye – or ear – involved in running a sophisticated nonprofit media operation. The financial support of the government entities, corporate sponsors, viewers and listeners is essential to making it happen, now and for future generations.

Essential to everything WGCU does is the maintenance of its TV and radio transmission equipment.

WGCU’s radio signal is available at 90.1 FM in most of Southwest Florida, but listeners in the Marco Island area tune in to 91.7 FM, designated as WMKO. Earlier this year, crews went to work on the WMKO tower in Marco Island to redirect the FM signal to include more of North Naples and less of the Everglades, where it was essentially wasted on alligators.

Then in April, the station began upgrades to the 929-foot tower shared by WGCU TV and FM, located on State Highway 31 in Punta Gorda, across from Babcock Ranch.

The station successfully applied for $3.7 million from the state of Florida to repair and reinforce the steel structure, repaint it and replace the LED lighting.

In March 2020, a new, more powerful TV transmission will begin thanks to a new antenna. That means a larger coverage area.

WGCU was honored to be part of a national PBS series, “Family Pictures USA,” which aired as three national episodes in August. In the spotlight were people in Southwest Florida, North Carolina and Detroit for separate shows in which they told family history stories based on family photos.

Along with North Carolina public television, WGCU was a presenting station for the episodes that ran all over the country.

WGCU members can use the streaming service Passport to watch the national episodes. See wgcu.org/passport for information.