H
AlumniCollege of Arts and Sciences

For alum, animals are much more than pet projects 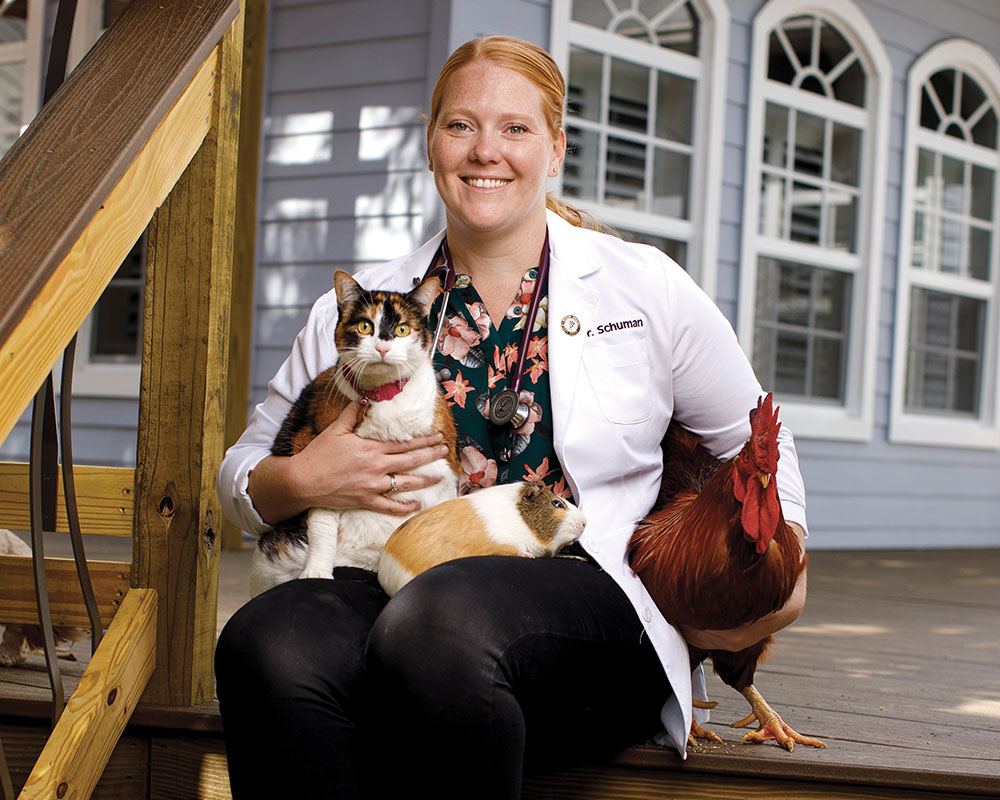 Meghan Schuman has come full circle. She grew up on a 35-acre spread in north Cape Coral that’s essentially a hobby farm. And for the past 2 years – ever since being named associate veterinarian at Viscaya-Prado Veterinary Hospital in Cape Coral – she has lived on that spread.

This is where she first dreamed of becoming a veterinarian. In a place like this, you are allowed to dream.

“When I was little girl, I remember standing on the gate and watching the cows graze in the morning,” she says. “I grew up with that lifestyle. Not too many people have that, especially in Cape Coral.

“People come out and say, ‘I didn’t know this existed. I’ve never seen anything like this.’ It’s a little nook in Cape Coral that’s a wooded area. We can kind of do whatever we want out here, which is nice.”

She lives there with assorted farm animals and her housemates – two dogs, a cat, a guinea pig and a bird.

Schuman took the necessarily long and winding road to becoming a veterinarian: She served as a kennel technician at Coral Veterinary Clinic in Fort Myers for four years while attending FGCU, graduating in 2009 with a biology degree. She then spent two years as a veterinary technician in Orlando before earning her doctorate of veterinary medicine from Western University of Health Sciences in California in 2017. Then she returned to take the job at Viscaya-Prado.

It’s a 24-hour facility, and Schuman is there at some odd hours.

“I do a lot of emergency C-sections,” she says. “That happens in the middle of a Friday night and they have nowhere else to go. Those are pretty exciting.

“I am one of the doctors who sees pocket pets – considered exotic animal medicine. I really like treating guinea pigs and rats that come in, often for pneumonia. They come in pretty sick and we hospitalize them and do nebulization treatments on them.”

Her job has frustrations, just like any job. But she finds powerful intrinsic reward in being a trusted ally of people who consider their pets to be family members and anxiously seek to have them restored to full health.

“You see an animal turn around and become more like themselves because of the kind of care we can give them – that’s one of cool parts of my job,” she says. “People bring in a pet that can’t speak for themselves. The animal might be all they have left in their life. That is everything to them. They trust me to take care of that and make them better.”

One recent surgery that really excited her was operating on a 16-year-old, 16-foot-long pet python whose tail had become necrotic, exposing her spinal cord. With the help of veterinarian Gary Nelson – who came out of retirement to assist – she successfully amputated the offending portion of the tail.

“She was 115 pounds and she was so beautiful,” Schuman says, adding that it gave her a lot of satisfaction to be able to take part in such an unusual procedure.

It won’t be long until she adds another service to those available at Viscaya-Prado: In October she expected to earn her certification in acupuncture and plans to begin offering it by the end of the year.

“I believe in Western medicine,” she says, “but I also think there’s a place for non-drug therapy.”

And, as if that’s not enough good news, she became engaged to her boyfriend, an emergency medical technician, in September. They expect to marry next fall.

She says FGCU gave her a well-rounded education that prepared her for vet school, and now her goal is to make it easier for others aspiring to be veterinarians.

FGCU has asked her to mentor students, and she welcomes the opportunity.

“I think that would be cool to talk to students if they want to come shadow me or want to know what’s going on in veterinary medicine,” she says. “I’d love to educate them while they are in their undergraduate field of study and want to get more of an awareness for vet school and the things you need to do to prepare for it.”