He was born and raised in Southwest Florida and went to Florida Gulf Coast University on a full scholarship the school offered at the time to high school valedictorians.

His wife is a former FGCU basketball star beloved by Eagles fans.

And he rides his bicycle to work in the heart of the progressive new solar-powered community, Babcock Ranch.

Mathieu Knapp (’15, exercise science), a Cape Coral native, is indeed the type of alumnus university founders had in mind when establishing the school not long before he was born: ambitious, accomplished, tied to the community and a proud representative of his hometown school.

“I was very pleased with the program,” said Knapp, 26, wellness and program manager for the Health Life Centers at Babcock Ranch, the burgeoning  community on the Lee-Charlotte county line where he and his wife, Taylor (formerly Gradinjan), built a home. “It was very rigorous. It was all worth it. Not to mention there was the beautiful campus and everything else.” 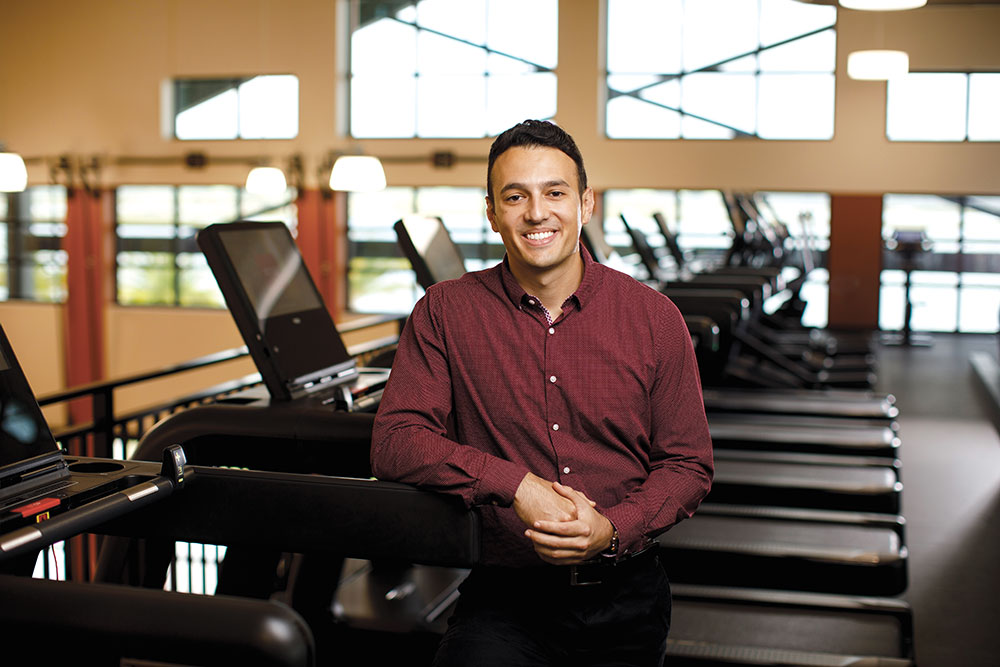 Knapp, tops in his graduating class of 28 at Cape Coral Christian School in 2010, always loved sports but entered FGCU intending to study business or engineering.

It wasn’t until he took a sports science course that he found the career path that would make him a fast-rising member in the health and wellness arm of Lee Health.

“You were learning about the body and how it moves,” he said. “From there on out I was like, ‘This is it.’”

After interning with Lee Health’s wellness center in Cape Coral, Knapp was hired upon graduating as an exercise specialist.

In work and at home, life couldn’t be any better for Knapp.

The Knapps moved into the house they built in Babcock Ranch in October 2018 and married last April. He hopes to start working soon on a master’s degree in business at FGCU.

Meanwhile, he’s on the Leadership Next Committee for the Greater Fort Myers Chamber of Commerce and he and his wife remain active at the university.

“We’re both part of the alumni association. We try to come back and hang out and give when we can,” Knapp said. “We are proud of FGCU and everything the school has become.”

His wife, who earned her master’s degree in health administration in 2018 and works for Sport and Spine Chiropractic in Fort Myers, became the rare collegiate athlete to have six seasons of eligibility after twice tearing the anterior cruciate ligament in the same knee in her first two years at FGCU.

“If I say her name anywhere, someone’s going to know it, which is quite impressive,” he said. “It makes me extra proud and honored to be her husband.”

Given the young couple’s career ambitions, Knapp can’t say Southwest Florida will be their permanent home. But with everything they have here, he expects to remain part of FGCU’s ever-widening local influence for some time.

“Since she’s from Wisconsin and the cold, she’s not going anywhere near it again. So she says,” Knapp said of his wife. “I’ve never actually touched snow. I have an inkling to try it out. But that could be just as a visit rather than to live. I’m getting a little tired of the heat. But we’ll be around for a while.”