Stacey Cook, CEO of SalusCare, embodies the FGCU Effect – and has done so each and every day since graduating in 2001 with her Master of Social Work degree as she approaches her job with heartfelt passion, unwavering commitment and steadfast leadership. 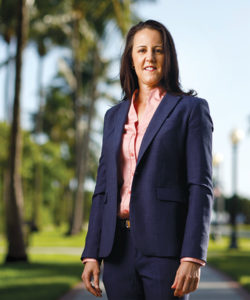 “I would define the FGCU Effect as an essential activating ingredient in my professional development,” says Cook. “Not just in terms of climbing the ladder of leadership, but also in the development of my sense of confidence and competency in positions of leadership and advocacy.”

SalusCare provides comprehensive behavioral healthcare services to Southwest Florida residents. Its 400 employees serve 16,000-plus adults and children annually. Services include crisis, residential and outpatient programs and community outreach. To lead an organization of such breadth and depth requires solid leadership.

Cook says her leadership skills took root during her tenure at FGCU. “Dr. Amanda Evans (assistant professor of social work), I remember her well. She made it clear early on that many students in my program, if not all of us, would be in leadership positions when we graduated. A big focus of our work was establishing leadership skills and establishing core competencies for success.”

Although FGCU was in its infancy when Cook enrolled in the master’s program, it was, she says, “a university from day one. The program had a significant imprint on me and on my tight-knit cohort of fellow students. It was a very supportive environment and a very rigorous program. When I graduated I felt incredibly accomplished.”

Cook began working in healthcare in 1993 as a volunteer at what was then known as the Ruth Cooper Center, where her mother was a nurse in the residential program. In fact, founder Ruth Cooper herself hired her. Later, her journey included running a Florida Assertive Community Treatment team (FACT) in Naples (which assisted the most seriously ill clients in their homes) and, ultimately, she joined SalusCare where she has held various positions of leadership.

“After graduation, most of my professional life has been working in an administrative capacity overseeing clinical and administrative operations,” says Cook, who was promoted to CEO of SalusCare in October 2015.

“I work with an incredible team of professionals,” she says. “I’m only as good as the people I work with, and the people who make it all happen – the direct care providers and workers.”

It’s a job that calls upon all of the skills she acquired as an undergraduate at the University of South Florida and as a graduate student at FGCU. It also requires stamina and patience, qualities she nurtures with early morning runs.

“It’s a great way for me to get grounded, and to connect with the environment and to clear my mind,” she says.

In looking back on her journey, reminiscing about her time at FGCU and thinking of those who influenced her most, who helped her answer the question, ‘How did I get where I am?’ she thinks about her mother, “my best friend and an incredible woman. She was the catalyst for me, and though she had some challenges, she helped me to learn from them. I see our journey together positively. I give her credit for why I’m here in this position and for who I’ve become as a person.”

Cook’s mother, who died several years ago, gave her daughter a note and asked her to keep it close to her and take it out whenever she is in need of comfort. Cook tucked that note in her wallet and has had it near her for the last 18 years. “It’s super important to me, it’s a message that reminds me of her presence and light – it gives me great strength,” she says.