It’s 7:30 on a sticky summer morning, and FGCU senior Ashley Blanchard and Ricky Cassell (’18, Environmental Studies) are on a boat with a crew of park rangers. By 8 a.m., they hit the pristine beach at Cayo Costa, an island off the coast of Lee and Charlotte counties, where the two interns hop on utility terrain vehicles and begin a slow crawl up the sand in search of turtle tracks.

They’ll spend three to four hours on the beach, finding and identifying tracks, covering nests with metal screens to keep coyotes and raccoons away from eggs, and marking the nests with poles that show the nesting date and number.

“I think they’re pretty incredible sea creatures,” Blanchard says. “As soon as they hit the water they have all the odds against them.”

The odds stack up against sea turtles before they even hatch.

Female sea turtles will lay a clutch of eggs on Cayo Costa up to eight times over the summer. Each clutch will have about 110 eggs, roughly 90 of which will hatch if they are not washed off the beach by major weather events. In 2017, Hurricane Irma struck after many nests had already hatched. Nonetheless, Phillip Allman, an FGCU biology professor who oversees the Cayo Costa internship program, estimates about 100 nests were washed out by the storm.

When the hatchlings make it out of the nest, they are at risk of getting eaten. Anything from sea birds to fish will eat a hatchling. Nearby lights from hotels and condos can disorient the turtles so they crawl toward traffic, swimming pools and buildings instead of the ocean.

More than half of the hatchlings will die soon after they leave the nest, and only one or two will survive 20 years to adulthood.

That underdog personality is part of what interested Allman in sea-turtle research 25 years ago, when he was an intern himself tagging sea-turtle flippers in North Carolina.

“I just sort of fell in love with them, and kind of recognized that’s here I wanted to take my career,” Allman says. “It’s a fairly competitive field to get into.”

While Allman’s primary research involves a sea-turtle conservation program in Ghana that he developed in 2006 – the first tagging program in West Africa – for the past two years, he has trained four interns each summer for the Cayo Costa research.

“The park has been monitoring and surveying the beach for many years, and they reached out to us two years ago and indicated they were interested in building a collaboration with the university and with me,” Allman says.

Last summer, the Florida Park Service gave FGCU a $15,000, annually recurring grant for four student and alumni interns to conduct the research. Every morning from May 1 through Oct. 31, two FGCU interns patrol the beach.

The goal is to study nesting trends over time, so scientists can track the health of Cayo Costa’s sea turtle population. The interns follow protocol created by the Florida Fish and Wildlife Conservation Commission, so their research can be included in state reports to make recommendations for sea-turtle conservation.

Once the turtles start to hatch, the interns take inventory of each nest to calculate the hatchling success rate. 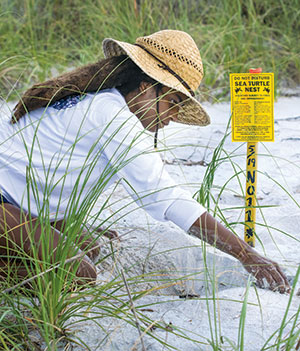 “Three days after the nest has hatched, we dig up the nest to make sure there aren’t any hatchlings still left that need to go to sea, and then we count the eggshells to see how big of a nest it was,” Blanchard says.

This research on Cayo Costa, a state-protected beach with natural conditions for turtle nesting, will be compared to findings on other beaches to help improve nesting conditions there.

“Cayo Costa is like nowhere else in all of Florida,” says Cassell. “I kind of think of it as the Wild West. There’s not a lot of development out there, so the way the island is right now is how it’s been for hundreds of years.”

Although Allman says the Cayo Costa research isn’t designed to document the impact of red tide on the hatchlings, who are rarely seen again once they get into the ocean, he says it is clear that red tide has caused fish mortality and is impacting other marine fauna.

This research is helping to show potential for sea-turtle protections, and is inspiring a new generation of marine researchers.

Allman says one of this summer’s interns started a graduate program in the fall to do sea-turtle work, and two of last year’s interns are doing turtle work in Florida.

Cassell is open to any career in biology – including one with sea turtles, which the Michigan native says he saw for the first time during this research.

“I’ve definitely come to appreciate turtles a lot more after seeing what they go through this summer,” Cassell says. “There’s a lot of hardships for the little guys.”

Blanchard also is targeting marine research as a career path, thanks in part to her experience on Cayo Costa.

How to help protect sea turtles

Sea turtles face enormous odds to make it from egg to adult. Here are some things humans can do to help them survive.