When FGCU Associate Professor Lyn Millner published a book in 2015 about a self-proclaimed religious prophet named Cyrus Teed and the cultish utopian community he established in Southwest Florida in the late 19th century, she jokingly figured at least her mother would read it. Ultimately, her father and her husband, FGCU instructor Jesse Millner, did, too. And soon she heard from people she didn’t know, who enjoyed her exploration of regional history and the communal society she chronicled in “The Allure of Immortality: An American Cult, a Florida Swamp, and a Renegade Prophet.”

Almost three years later, her Google Alerts for online mentions of the charismatic Teed and his devoted Koreshans had dwindled — until Aug. 25. That’s when a surprising alert landed in her inbox.

“I started reading the email and thought, ‘Oh man, the Wall Street Journal wrote something about Cyrus Teed — oh wait, that’s my book title — oh, that’s my name!” Millner recalls. “It’s funny because I had the alert set forever, and it’s usually some sleepy little mention, no big deal. This is a big deal. I was so surprised.”

Her 3-year-old volume was named one of five best books about cults in a Wall Street Journal feature published in print and online — a splash of free national publicity that could add lifespan to “Immortality.” The list was compiled by Jeff Guinn, author of “The Road to Jonestown: Jim Jones and Peoples Temple,” a comprehensive 2017 book about the largest murder-suicide in American history.

In other words, Guinn knows his cult figures. He placed Millner’s book of narrative journalism published by University Press of Florida between two bestselling examinations of sects: “The Ashes of Waco: An Investigation” by Dick J. Reavis and “Going Clear: Scientology and the Prison of Belief” by Lawrence Wright, which was adapted into an HBO documentary. 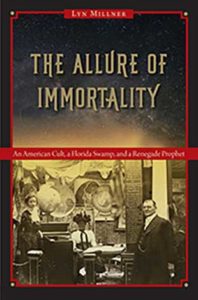 “Lawrence Wright was the big one for me,” Millner says of the authors who bookend her on the list. “I had a couple of books sitting on my desk when I was writing ‘Immortality.’ ‘Going Clear’ was one of them. When I saw that on the list, I thought, ‘Wow.’”

A journalism professor in the Department of Communication and Philosophy, Millner doesn’t know for sure how Guinn discovered her book. But she learned through Facebook connections with the Southwest Florida Historical Society that the author had been in Fort Myers last year doing research. His other books include examinations of Charles Manson and Bonnie and Clyde.

As for Millner, she has mostly moved beyond her fascination with the faithful Koreshans, who practiced celibacy and believed a hollow Earth contained the entire universe within it.  She still enjoys hearing of new findings and helping others with research related to the subject; earlier this year she “geeked out,” she says, when an archivist sent her a photo of a newly discovered set of dentures believed to have belonged to Teed.

Currently, she’s immersed in studying the treatment of women confined in French hospitals in the late 19th century for hysteria. Taking advantage of FGCU’s free courses for faculty and staff, Millner also immersed herself in French classes last year to help with her research. She has traveled to the Paris institution where the women were hospitalized and where the father of modern neurology, Jean-Martin Charcot, observed them and became known for working with hypnosis.

“This ties into the #MeToo movement,” she says of her research. “These women were sort of put away, taken advantage of, not in control of their lives. They were, in effect, controlled by men who had power over them.”