Lyn Millner was mulling over ideas for a magazine story to pitch and thought the Koreshans seemed like an interesting subject to research and write about. A cultish community founded by a self-proclaimed prophet named Cyrus Teed, the Koreshans established a utopian commune in Estero in the late 19th century. They practiced celibacy and believed Earth was hollow and contained the entire universe within it.

Millner, an associate professor in the Department of Communication and Philosophy, soon realized a 2,000-word article wouldn’t be sufficient to tell the tale. The result is the book “The Allure of Immortality: An American Cult, a Florida Swamp, and a Renegade Prophet,” newly published by University Press of Florida.

“The Koreshans wouldn’t let me go,” Millner says. “What haunted me was the question of why a group of people would give up everything to follow a man into a mosquito-infested forest to build a city. It seemed crazy to me, but the more I researched it, the less crazy they seemed. We all know someone who has made a radical change that puzzles us, but we rarely explore why. The more I followed my curiosity about them, it became apparent that in 2,000 words, I wouldn’t get beyond “Gee, aren’t they kooky?” I saw that they deserved their own book.”

You can see remnants of the community at the Koreshan State Historic Site at U.S. 41 and Corkscrew Road. The few remaining Koreshans deeded the park land to the state in 1961.

FGCU360 asked Millner to share a bit of what she learned.

How would you describe your book – is it a comprehensive history? Investigative journalism?

Narrative journalism. Erik Larson’s “Devil in the White City” was a model for me. The book reads like a story — with scenes, dialog and characters —and it’s the first definitive history of the Koreshans. 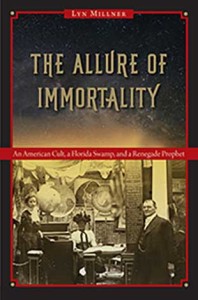 Was there a lot of information available about the Koreshans?

What did you learn in your research that was new or surprising?

Several myths turned out not to be true. One was that Cyrus Teed died because of a street fight in Fort Myers. Speaking to a neurologist led me to a deeper story about how the human mind works. Another myth was that Teed’s entire body was swept out to sea by the 1921 hurricane. But the Koreshans found several of his bones and his skull when they cleaned up his tomb.

Why did they choose to set down roots in Estero?

Before they came here, they were in Chicago, where they had trouble paying their heating and water bills and their rent. The media harassed them. Citizens held indignation meetings in front of their living quarters. And there were lawsuits. They wanted peace and isolation. And here was this man in Estero who wrote to them, trying to sell his land. Ultimately, he transferred it to them nearly for free. It was property on a river that crossed the only path from Fort Myers to Naples (now U.S. 41). They could fish and grow their own food. No heating bills. No rent. And for a while, no media harassment.

What were some of the hardships they faced here?

What kind of folks were those who joined – were they educated people?

Definitely educated. They studied Latin and Greek, they read and performed Shakespeare. They valued culture. They had their own orchestra, band and drama troupe. They kept up with the news.

Were such cults more commonplace in the 19th century?

They were, but Teed was very late to the game. By the late 19th century, most utopian societies had failed. People were finding that social reform could be done more effectively within society, rather than apart from it. Which made the Koreshans seem quaint and odd.

Was Teed’s allure mostly grounded in a cult of personality?

He wasn’t all that successful in his efforts to develop a cult of personality. It was more about his charisma. Account after account tells of his powerful, resonant speaking voice and his piercing eyes. [Florida journalist and environmentalist] Marjory Stoneman Douglas, for instance, wrote that he was a magnetic man. So there was that. But also, what drew people to Koreshanity was that he had answers to all of the mysteries in the universe. That’s pretty seductive if you think about it.

Some accounts say that a powerful electrical shock that knocked him unconscious preceded his claim of divine inspiration, or “illumination.”

I was not able to confirm the electric shock. What I was able to confirm — from Teed’s writings, from psychiatry of the day, and from talking to a modern-day psychiatrist — was that he very likely had narcissistic personality disorder and bipolar disorder. Delusions — such as his “illumination” — could have gone along with that. Of course, it’s very possible that he knew full well that he didn’t have the illumination, and that he invented it. It’s curious that he did not publish anything about it for years, until he had several followers. We’ll never know whether he earnestly believed he was a savior — or whether he was a charlatan.

Why do you think people are still interested in learning about the Koreshans?

The Koreshans wanted what we all want: To live somewhere beautiful away from pollution and crime, to eat healthy food, to have more time to play, to raise our children the way we see fit, to have answers. To transcend. That’s hard to turn away from. We want to dismiss them as different. That’s convenient. But untrue.