Marieb College reaches out to region with psychological first aid

The Mental Health First Aid team is a group of trained students, faculty and staff who head into surrounding communities to deliver disaster relief, including the supplies and psychological first aid survivors need.

In September, a team of 16 volunteers – students, faculty and a community member – distributed $1,000 worth of supplies and worked with residents experiencing distress as a result of Hurricane Irma and its aftermath. Those they helped included at-risk adolescent girls at the PACE Center for Girls as well as Gateway Elementary School in Fort Myers and Manatee Elementary in Naples.

A second team of 20 went to Everglades City School in December, armed with athletics and recreation equipment to replace what had been destroyed in the storm. The day included an ice cream social and time for the students to talk about life post-Irma.

The effort came about after a $5,000 donation from David W. and Dr. Alise G. Bartley, who moved to Bonita Springs from Canton, Ohio three weeks before Irma struck. Alise Bartley is an educator, therapist, and part-time faculty member at FGCU, who spent two weeks volunteering to help counsel survivors of Hurricane Katrina in Biloxi, Miss.

She and her husband have pledged another $10,000 to match donations from other members of the community to kick start the Marieb College of Health & Human Services Community Relief Fund.

“We believe in this community and we want to be part of the solution for those who are struggling right now,” she says.

So what, exactly, is psychological first aid?

It’s short-term counseling geared to helping people get back on their feet and start moving forward.

“One of the main premises is to meet the person where they are,” says FGCU counseling Associate Professor Abbe Finn, who works extensively in this field. “People react radically differently. You help them connect with their support system and help them to regain their balance.”

Some people respond by fighting – for their own lives or those of others. The stress often hits later, after the emergency has passed and they begin to experience anxiety, insomnia or loss of appetite. Others may freeze immediately and be unable to do anything for themselves or their families.

After the hurricane, Alise Bartley and her colleagues in counseling came up with a plan to create these teams. They hope to conduct training sessions once a month or so to be ready when disasters such as hurricanes, fires or other emergencies strike. That way they can move quickly to help.

“These experiences are life changing and they are meant to be,” says Bartley of the encounters with survivors.

Finn has extensive experience with psychological first aid, having worked with survivors on Wall Street following the 9/11 terrorist attacks and just recently with those of the Parkland shootings, and has seen the good it can do. “It’s intense but it’s part of what I love about it,” she says. “You’re completely engaged. You’re doing something.”

Assistant Professor Ann Tilman from the counseling program led team-building exercises. Finn handed out chalk so students could draw their experiences. And they offered students a variety of ice cream treats so they could pick what they wanted.

“Choice is so important when giving people help,” Bartley says. “Too many times we give them what we think they need instead of what they’d like to have.”

Hannah Varnadoe, a graduate student in the clinical mental health program, had never been to Everglades City before joining the team.

“I’ve been through hurricanes,” having grown up in Orlando, “but I’ve never seen the devastation that this one brought, especially in this sea-faring community,” she says. “Without their boats, the people in this town were devastated.”

The children talked about being displaced from their homes and that many of their parents were out of work.

Taking part in the team effort “gave me a good feeling. It made me realize how much the people had lost and how much the kids just wanted to be back in their homes.”

It made her happy to see how much joy the students got from the athletic equipment. “The school is really gung-ho about baseball,” she says. “And they loved the hula hoops.”

Most people can remember where they were when a particular catastrophe happened. But Abbe Finn, an FGCU associate professor of clinical mental health, knows better than most.

She often winds up at the site of the disaster. She was on Wall Street after terrorists brought down the World Trade Center towers on Sept. 11, 2001. She spent time in New Orleans in 2005, after Hurricane Katrina devastated that city, helping residents mourn their losses and heal. 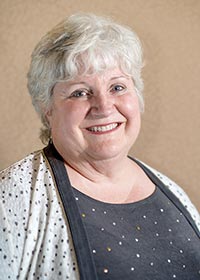 She spent a week as part of a team of counselors from schools, the FBI and sheriff’s department, psychologists, therapy dogs and many others there to help people recover.

Finn walked around with bottles of ice water and pamphlets offering tips on self-care and handed them out as she approached people, many of whom would start talking.

Parents told her their happy-go-lucky children many kids were now agitated and cranky.

“A women said she asked her kids what they wanted for lunch and the kids would yell ‘I don’t know. Don’t ask me!”

She explained to them that the kids weren’t angry at their parents. “They’re just angry,” she says.

One young man had become non-verbal, unwilling to talk to anyone. Finn saw him a couple of days later with the therapy dogs. “I saw him bend down and pat one of the dogs and then he was talking to it.”

This is tough work, she concedes, but work she embraces.

“It’s difficult, but if there’s any way you can help people through this and you have the skills for it, I’d rather be there helping than standing on the sidelines and watching. It was an extraordinary experience.”