Cheeps by the dozen

In Andy and Angela Kunkle’s world, the chickens most definitely came before the eggs.

A dozen peeps, to be specific. They were given to the Kunkles as a gift from Angela’s dad at Easter time a year ago. But unlike the untold numbers of baby chicks in a box or a basket that have scratch chance of survival once the holiday novelty wears off, the Kunkles’ little Rhode Island Reds — all 12 of them, including a gravely sick chick that Andy had to nurse back to the brood by handfeeding it with a syringe — lived to become the gift that keeps on giving.

That gift? Eggs. Usually one every day from each hen. All brown. All natural. All nutritious.

Andy (’02, Computer Information Systems) and Angela (’04, Communication) are both Florida Gulf Coast University alums, with Angela still firmly entrenched in The Nest as University Advancement assistant director for major gifts. So for these two Eagles, married life, their two young children, a dog and a dozen hens in a backyard barnyard at their one-acre property just minutes from campus, is just about everything family happiness is cracked up to be.

“We’d been talking about doing something like this, and then my dad showed up with the 12 chicks in a cage and supplies,” Angela said. “I thought maybe eight of them would make it. But they all lived.”

Andy, who had just started his current job as an IT engineer for Suffolk Construction in its Estero office, wasn’t exactly prepared for his father-in-law’s surprise gift when he got home that Good Friday. “I had been traveling around the state all week, I’m exhausted, and I come home to these 12 chickens,” he said. “And I’m thinking, ‘Oh great.’ And then I’m thinking, “I don’t have any place to put these chickens.”’

Actually, raising chickens would merely be a matter of Andy altering his backyard farming game from vegetable gardening, which he grew up enjoying harvests from in his native Maryland thanks to the green-thumb passion of his own biology-teacher dad. “I started gardens when I moved down to Florida, and had some success,” he said. “It does take more effort than growing things in Maryland, and the seasons are the opposite. It’s too hot to grow anything other than hot peppers in the summer here.”

So, Andy and Angela’s dad, Larry Hodge, spent all Easter weekend building a bigger coop (about 4 feet-by-6-feet-by-4-feet). “The chicks were completely free-range at the time because we have a fenced-in backyard,” Angela said. “But then the dogs and kids started tracking chicken poop into the house, so we decided we needed a bigger coop.” 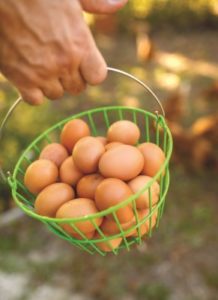 That’s when Andy built the current structure, which has dimensions of 16-by-10-by-8 and cost him $600 to $800 in materials. “I spent a lot of time on it,” Andy said. “I predator-proofed it as much as possible. It’s well-fortified.”

Indeed, the Kunkles have yet to see one of their chickens become dinner for the panthers, bobcats, bears and raccoons that have been spotted at various times in their neck of the woods. “We’ve been fortunate so far,” Andy said.

The collection of cacklers not only has survived the mortality of infancy and neighborhood nuisances with sharp teeth, but scrambled to ride out Hurricane Irma this past September after the Kunkles made a late decision to evacuate and Andy told the chicks they were “on their own.”

“I chained the door to the coop open for them, and a big ficus tree — about 40 feet tall and six feet in diameter — got knocked down next to the coop from the 100-mile-per-hour winds. They came out and hid underneath that tree during the storm, because we found about 30 eggs they laid throughout the root system. For as silly and dumb as they look, they knew what to do,” Andy said.

The chicks are fairly high-maintenance when they are young, which is why the Kunkles recommend starting out with just a few birds instead of the dozen they did. Temperature for the babies is critical, with warmth from a heat lamp and cool areas both needed inside the coop. Chicks also make bigger messes in their bedding and water, and Andy even had to clean and clip feathers on the butts of some so they didn’t get clogged.

Now that the chickens are older, they only require about 15 to 20 minutes of care each day. Andy makes sure they get the best natural feed — he grows his own rye grass, and they also eat barley and “all of our table scraps. Everything we feed them is non-GMO, organic and as natural as possible,” he said. It costs about $20 to feed the flock for a month.

So, here’s the scoop if you want your own coop, assuming first your residence is zoned for agricultural uses (check with local code enforcement): When you tally the cost of the chicks (they usually range from $1 to $5 each, with females more expensive), starter and permanent caging, food and incidental expenses, it’ll cost you roughly $1,000 or so to crack into this hobby. The rewards from that investment?

For starters, there’s the entertainment of watching the flock in action. “There’s a definite pecking order,” Andy said. “If I bring a head of lettuce in, the birds on the low rung stay way back. Even if I toss them a piece, the others will swarm over there and take it back.”

Then there’s the sunny side of being henpecked. “If I ever have a bad day, all I need to do is go home and watch those chickens for five minutes, and I don’t have a bad day anymore,” he said.

Although they haven’t personalized these pets by giving the chickens individual names, “just because we didn’t name them doesn’t mean we aren’t attached to them,” Angela said. “They all have their own personalities. And our kids are comfortable around them. They might come up and peck you lightly to check you out, but it doesn’t hurt.”

And of course, there are those gifts from the gifts that keep on giving: the eggs themselves, all with brown shells (that’s what Rhode Island Reds lay) and yolks with an orange tint, which comes from the nutritious diet the flock is fed. If the eggs aren’t washed and retain the protective coating on the shells — called egg bloom — these Kunkle Rhode Island Red eggs stay fresh indefinitely without refrigeration.

“We use a lot of them,” Angela said. “I’ll boil some and take them to work during the week. And Andy sells quite a bit to people he works with.”

Most proceeds from the informal family egg sales go to good causes that are tough to beat. While a fraction goes toward feed expenses and the Kunkle Family Scholarship Endowed Fund in Honor of Jay Kunkle — awarded to FGCU science students in tribute to the man who first got his son Andy started in backyard sustainability — most goes into college savings accounts for the Kunkles’ children: Alexandra, 4; and Aiden, 1.

That’s what you call real nest eggs, funded by 12 little chickens raised and tended by birds of a different feather: a couple of FGCU Eagles.