Cleaning up mess some bunny owners leave behind

As co-founder of the Southwest Florida House Rabbit Rescue, the instructor in Florida Gulf Coast University’s Department of Marine and Ecological Sciences and her bunny-loving brigade have to clean up the mess – figuratively and, in many cases, literally – left by irresponsible adults who use rabbits as impulse-buy Easter gifts that become yesterday’s novelty in a few weeks.

“About four months after Easter, we get an influx,” said Macbeth, who has taught University Colloquium continuously longer than any full-time faculty member at FGCU. “That’s when rabbits reach sexual maturity, and they’re not cute babies anymore. They get bigger, they can get aggressive and kids lose interest.”

According to the rescue, eight out of 10 rabbits bought for Easter are looking for new homes by midsummer. In a best-case scenario for the unwanted pets, either the owner or advocates such as Macbeth’s rescue group find Thumper loving foster care. Worst case, Bugs is sent free along the bunny trail, doomed to live in fear before he’s eventually killed and eaten by a predator. Or perhaps Peter ends up in the belly of a big snake after the reptile’s owner responds to a free-rabbit-to-good-home Craigslist ad.

The moral of the story?

Unless you are willing to take care of a high-maintenance pet that can live 10 years; never stops chewing because its teeth never stop growing; can get aggressive without specialized spaying or neutering that costs about $300; should be socialized and live indoors in cages that can cost up to $100; are willing to provide rabbit diet, hay, fresh veggies and fruits, toys and other supplies that add up to even greater expense – and, of course, embrace cleaning dirty cages and a seemingly endless stream of tiny, round poop pellets – well … you better just keep walking past that pet-shop display with the huggable litter of cute baby bunnies, and don’t look back.

“People get them as pets for children, but they really aren’t good pets for kids,” Macbeth said. “Suddenly, a pet they bought for 20 bucks becomes an expensive animal to keep.”

Growing up on a farm in Hamburg, Pa., surrounded by animals, Macbeth used to think rabbits were simply livestock that belonged in outdoor hutches. It was only after she took in a wayward rabbit running loose on the campus of Loyola University during her own schooling that she realized bunnies are actually highly social animals that, when domesticated, need to live indoors, preferably with a bonded mate.

Macbeth co-founded the rescue in 2015 with Naples resident Lisa Walkup, a recruiter for Physicians Regional Healthcare System, after the two met by circumstance in the waiting room of a Fort Myers veterinary office as they sought treatment for their respective pet rabbits: Macbeth’s beloved Basil and Walkup’s Bumble Bee. They went their separate ways that day, but after a Naples woman took in two wayward bunnies roaming her neighborhood that quickly turned into a pack of six – “Rabbits can reproduce every 31 days,” Macbeth said – the Good Samaritan desperately contacted the Fort Myers vet for help. The vet referred her to Macbeth and Walkup, and Southwest Florida House Rabbit Rescue was born.

The rescue’s reputation and popularity really took off about a year ago when Macbeth and Walkup drove all the way to Jacksonville to save Fuzzy Pants, a young rabbit that had been seized from three teenage girls who posted a video of themselves on Snapchat throwing the bunny against a wall and kicking the frightened animal. The girls were arrested and charged with felony animal cruelty after some parents saw the video and alerted law enforcement. Fuzzy Pants ended up in a loving foster home cuddling with a new bonded mate after the story got national attention and a gofundme.com page Macbeth set up raised almost $8,000 for the rabbit’s medical treatment and care.

“Rabbits are the third-largest pet population in the United States, so there’s a big need for rescues,” said Macbeth, who “tries to keep my limit at 10 bunnies” in her own foster home, which she and the rabbits share with her husband, their 2-year-old child and a turtle.

“We get calls every day. We can’t take them all, but we try to work with people, and sometimes we can resolve socialization issues without them having to surrender the rabbit. We also deal with abuse and hoarding cases, and work with other rabbit rescues as needed. There was one in Georgia we helped out that had 150 rabbits.”

SWFL House Rabbit Rescue is now working with six local foster homes, where the long-eared clients get socialized, litter-box trained, spayed or neutered, bonded with other rabbits and, hopefully, adopted out with a take-home bundle of rabbit-care education. As part of its outreach, the rescue even sends pet-therapy bunnies to cheer elderly residents of The Terraces at Bonita Springs. 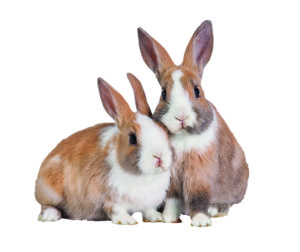 Helping the cause are FGCU students who work with the rescue, which is a registered 501 (c)(3) organization sanctioned by the university’s Office of Service-Learning and Civic Engagement for service-learning hours. Some students end up fostering and adopting the rabbits they help save, such as Lauren Raponi, a junior marketing major and Honors student from Toronto who calls herself “mother to five rabbits – three fosters and two of my own.”

Besides giving and helping to get bunnies good homes, Raponi says working with Macbeth and the rescue has made her a better student. “Through all this responsibility outside school, I actually became more organized, even with my studies, because I have such a passion for the rescue and the people I’ve met through Jen,” Raponi said. “I have no doubt that my positive attitude and successes in school correlate directly to the rescue … This mindset, I believe, is responsible for the mental growth I’ve achieved since moving to Florida.”

That kind of education – whether it be furthering social awareness and responsibility of students such as Raponi, or that of previously unsuccessful or potential future rabbit owners – is what Macbeth and the rescue are all about.

“My vision is not to have a shelter, because rabbits don’t do well in a shelter setting,” Macbeth said. “We just want to operate out of loving foster homes, and focus on education so we have fewer rabbits to rescue.”

In that vein, the rescue publishes a pamphlet that not only outlines its goals and services, but tries to educate the public on the cost and responsibility involved with rabbit ownership. One of the graphics it contains has a picture of a chocolate-candy bunny you’d find wrapped in cellophane inside an Easter basket with the tagline, “Lasts 10 minutes.” It’s paired with a second photo, this one of a charmingly cute, light-brown live rabbit with the caption, “Lasts 10 years.” The punchline: “This Easter, which level of commitment are you looking for?”

Just something to consider when shopping for Easter gifts next spring, before you make Jen Macbeth’s summer of 2018 miserable.[/vc_column_text][/vc_column][vc_column width=”1/3″][vc_column_text]For information on how you can help: