Alum’s foresight is full-sail ahead

The FGCU Sailing Club has Kris Scheppe to thank. It took time to make it happen, but happen it did, albeit a little more slowly than Scheppe might have liked. By the time he garnered all the support he needed from the South Atlantic Intercollegiate Sailing Association, he’d graduated. The following semester, FGCU Sailing Club members competed in their first sailing regatta without him.

Perhaps more remarkable than Scheppe’s love of sailing and his founding of the club is that he is vision impaired. Born with a genetic eye disease, Scheppe, 37, has no peripheral vision; his forward sight is reduced to a pinhole, “like looking through a straw,” he said. 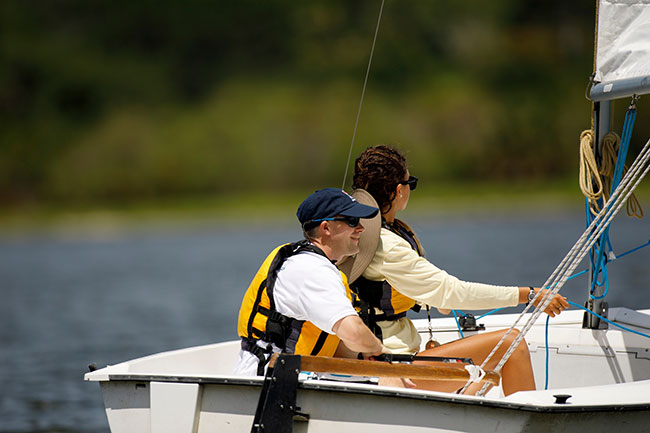 Not that his vision challenges have ever stopped him. An environmental studies major at FGCU, he was director of environmental affairs for Student Government; president of the Intervarsity Christian Fellowship and, as a member of the powerlifting team, took third at collegiate nationals and second at the North American Powerlifting Championship.

His experience in Student Government and his competitive drive have served him well over the years. “I definitely had great opportunities at FGCU,” said Scheppe, who lives in Naples. “Student government taught me how to advocate. And sports are always big. We had a great powerlifting coach in Jim Dundon. He was there for all athletes. Honestly, without competing in sports, I don’t think I’d be where I am today.”

Where he is today is nothing short of inspirational. He races competitively in national and world blind sailing competitions. His latest achievement is the 2016 Boston Open Blind Sailing Regatta where he placed first. In 2015, he earned a bronze medal in the Blind Fleet Racing World Championship. The year before that, it was bronze in the Blind Match Racing World Championship,

Which brings us to the logistics of blind sailing – Match Racing vs. Fleet Racing. In Match Racing, two boats compete; the winner progresses through a bracket system much like March Madness basketball finals. Match boats have a three-person crew, all visually impaired. Buoys and boats emit sounds. Crew members work as a team, navigating via sound and feeling the wind. 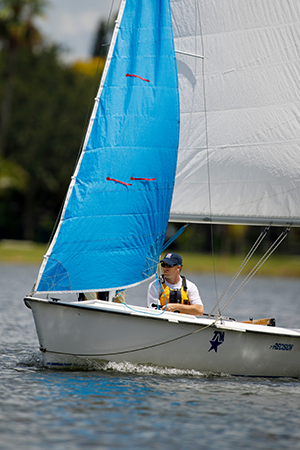