Nobody has better wildlife stories than fearless Fowler

When former “Mutual of Omaha’s Wild Kingdom” host and environmental champion Jim Fowler appears at Florida Gulf Coast University later this month, get ready to hear stories that can be told only by a man who has looked a charging elephant in the eye or almost been eaten alive by a 20-foot snake.

Fowler, 84, an ambassador for the “Think Big, Get Wild Challenge” environmental awareness campaign, is scheduled to appear at 2 p.m. March 31 in Cohen Center 247 in an event billed as “Never Say Goodbye.” He’s a special guest of FGCU’s Wings of Hope program, which fosters a love of animals in area elementary-school children. RSVP program director Ricky Pires at [email protected] to reserve a seat at Fowler’s appearance. He’ll be joined by Tina and Bryce Osceola, members of the Seminole Tribe of Florida Panther Clan.

These days, besides thinking big and getting wild, Fowler’s also seeking corporate sponsorship for a National Public Radio show he’d like to host, and has plans for his own line of outdoor apparel. FGCU360 recently talked with Fowler for more than an hour by phone from his Connecticut home and were regaled by incredible tales from every continent, but not before his enthusiastic endorsement for what he emphatically calls “sustainable consumption” — how human consumers should link with consumers of the natural world in a two-way, win-win situation.

From that memorable conversation, we have selected three of our favorite Fowler fables. The harrowing tale about the time he climbed 200-foot trees in the former British Guiana (now Guyana) deep in the Amazon in pursuit of one of the world’s largest eagle species, the harpy — “which eats 30-pound monkeys, by the way,” Fowler said — doesn’t even make the cut. Yet it was Fowler’s appearance on NBC’s “Today” with the three harpy eagles he captured during that high-wire act that first caught the attention of Marlin Perkins, and a beautiful TV partnership formed that would last until Perkins left “Wild Kingdom” in 1985 and died a year later.

“Johnny Carson, a really close friend who had me on the ‘Tonight Show’ about a hundred times, used to joke that I was the only guy Marlin could find who was dumb enough to do what he told me to do,” Fowler said with a laugh.

None of our three favorite Fowler adventures involves any of the three animals he says are the only ones that will attack, kill and eat humans unprovoked: the great white shark, the polar bear and the Nile crocodile, the latter of which is much more dangerous than the American crocodile native to Florida (although there have been recent Nile croc sightings in the Everglades, which could give us something besides Burmese pythons to worry about as far as exotics go).

Instead, we most enjoyed hearing Fowler’s recollections about: 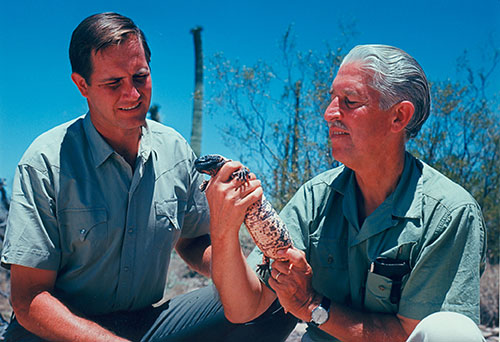 — The time in Africa he was charged by a stampede of about 200 elephants, led by an angry female protecting her calf.

“There were five guys trying to scramble inside the same side door of an open Land Rover, so I jumped in the back,” Fowler said. “Well, of course, the accelerator was wedged, stuck by a stick, so
here comes this mother elephant running right at me, and I knew what she was going to do — knock me to the ground with her trunk then bury me with her head. She swings at me once, and I duck under her trunk by getting down on the floor, then she swings at me again and barely misses … just as these guys get the pedal unstuck and we get out of there.

“You can bluff bull elephants — they’re full of baloney just like all us men — but you can’t bluff an angry female.”

— Then there was another time, in that same British Guiana region of the Amazon where he had captured harpy eagles, when he told the locals he wanted to get a giant anaconda on film.

“I just wanted them to take me to where the snakes were, but here these guys come bringing a 20-foot anaconda as thick as an ale keg into our camp,” Fowler said. “The snake was pretty banged up, so we put it into a deep pit where it could heal. Well, it healed pretty fast, because when I tried to handle it with a hook, it got free and bit my hand, and quickly swallowed my wrist.

“The scientist who was with me — I took him along as my photographer because he owned all this fancy camera equipment — I find out he’s scared to death of snakes, and I see him hiding way back behind me with his hands over his eyes. So I turn to the three Indians who were working for me, looking for help, and I see them running off into the forest. Soon the snake had swallowed my arm up to the shoulder. I managed to grab its tail to keep it from wrapping on me, and the only way I could save myself was to stop struggling so it would quit trying to eat me, which I did.

“Eventually, I managed to break its teeth, and it let go and backed off. But then it went on a rampage through this temporary Indian village we were in, demolishing tables, equipment. Now, here’s the part of the story my wife (Betsey, a talented wildlife artist and Fowler’s spouse of 44 years with whom he has two adult children) doesn’t like me to tell. A big dog that lived in the village comes running out and starts barking at the snake — it was pretty big, about as big as a German shepherd — so the snake grabs the dog and takes it away in the marsh.”

— Finally, there’s the famous “Seinfeld” episode in which he appeared during the series’ ninth and final season in 1997.

Fowler played himself as a “guest” on the original set of “The Merv Griffin Show,” which Jerry Seinfeld’s neighbor, Cosmo Kramer, had found in a trash pile and reassembled in his apartment. The storyline has a hawk that Fowler brought along for the bogus talk-show appearance attacking a squirrel for which another Seinfeld friend, George Costanza, had just paid a sizable veterinary bill to save.

When “Seinfeld” went into syndication, Fowler — who at first didn’t want to do the show but was talked into it by his son, Mark — originally got paid about $400 each time the episode aired. Today, 20 years later, the residual is about $6 a pop.

“It’s enough to buy me a sandwich,” Fowler said with a chuckle.