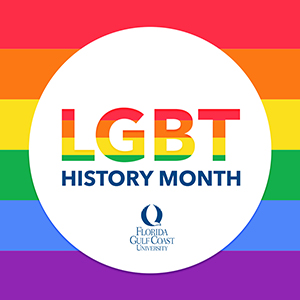 As a young gay man coming of age in a small New England town, Florida Gulf Coast University alumnus Joshua Lambert struggled to find reading material featuring characters to whom he could relate. Today, the 2017 resort and hospitality management graduate helps others who face similar challenges by providing them with a source of literary options aimed at gay, lesbian, transgender and other queer audiences.

In 2020, Lambert founded Project Open Books, a nonprofit organization dedicated to improving access to age-appropriate books and stories for readers across the country. He characterized the nonprofit as “a project birthed from a bundle of ideas” centered around his desire to affect positive change.

“In high school, I found it difficult to connect to anything I read in class or at home. I often avoided reading because the material I had access to made me feel insecure about being different,” he said. Lambert eventually turned to the internet for information and literature.

“I would read stories on Tumblr and Twitter and follow accounts where people shared their experiences. It was what I could relate to,” he said. “When I turned 16 and had a car plus a debit card, I would pre-order LGBTQIA+ coming-of-age novels at the nearest Barnes & Noble. Those stories and characters helped me tremendously before I was ready to accept who I was as a young person in this confusing world.”

Lambert said he decided to pay it forward by providing people with free access to stories to which they can connect and that provide a sense of empowerment. “I want people to know they are not alone in their journey. I want to help young people in communities that don’t have a Barnes & Noble or a public library with diverse offerings,” he said.

“I want to reach people who struggle in their own skin. It’s my goal to create a sense of community through reading. It’s my hope that this project can help change lives, spread love and promote wonderful stories from writers who dedicate their lives to providing us with such content,” Lambert said.

Through donations, Project Open Books maintains a library of approximately 150 titles ranging from children’s picture books through middle-grade stories to novels for young adults. Readers select books from the nonprofit’s website, and volunteers mail the books free of charge to addresses across the continental U.S. The organization has sent out more than 1,200 books, valued at more than $17,000, supporting hundreds of individual classrooms and school libraries.

Those efforts are ramping up as schools nationwide have been pulling books from shelves because of so-called inappropriate content. “What we’ve seen in the last few years is a significant uptick in book bans and a growing attack on the LGBTQIA+ community, specifically affecting young readers,” Lambert said. “While Project Open Books challenges those opinions as a champion for access to queer-affirming books, the nonprofit is a nonpolitical organization focused on micro impact and grassroots fundraising to influence changes within a variety of communities – including those experiencing this surge in book bans.”

Lambert credits his time at FGCU with helping him in his nonprofit work, especially his experiences as a leader in Eagle View Orientation. “It was beyond a pleasure to be an orientation leader,” he said. “I think that experience really led me down this path of approaching all pieces of my life with a more inclusive lens, one where I’m able to celebrate our differences and have a genuine interest in where people come from, what they’ve experienced and what I can learn from them.”

Joining Lambert in Project Open Books are two alumni who also served as orientation leaders and both graduated in 2019 with communication degrees. Michael Rybak, who is a career development coordinator at Appalachian State University, serves as vice president; and Sierra Stevens, a senior associate campus recruiter for J.P. Morgan Chase, is secretary.

“Young people will always have a need for representation, especially folks who identify with historically underserved communities,” Rybak said. “When I was growing up, I didn’t have a queer role model, which was a direct reflection of my development and inability to sustain self-confidence for many years. By connecting young people with stories and characters that they can relate to, we are giving them a gateway toward becoming the most authentic versions of themselves or, in the least, an opportunity to escape a current reality that may not be extremely affirming or validating.”

When he’s not running a nonprofit, Lambert spends his days as a remote account executive for tourism marketing agency MMGY Global, serving the Lee County Visitor and Convention Bureau. In a full-circle professional move, it’s the same bureau where Lambert completed his FGCU internship and where he landed his first job after graduation.