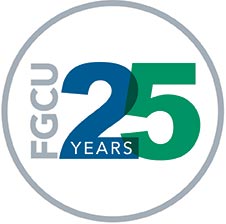 Barrett Stejskal was a 6-foot-5, 280-pound man-mountain who loved the outdoors and didn’t mind expressing it during his years at Florida Gulf Coast University. Even if that included rolling down the window of his car during dates with fellow undergrad Christina Shapiro, mooing at cows and magically hearing them moo back at him.

It was a far different place back then before these two Eagles paired in marriage and a business, BearPaws Environmental Consulting. When Stejskal was a freshman in 1998, Gulf Coast Town Center didn’t exist (that wouldn’t happen until seven years later), Miromar Outlets had just opened (at about half the size it is now), and there wasn’t a lot of concrete in between. The campus was a rural wonderland – a 760-acre expanse of pinewoods and wetlands, with regular sightings of wild boar, gators and bobcats.

“It seemed like we were in the middle of nowhere,” he recalls, reminiscing on the occasion of FGCU’s 25th anniversary. “I had this big Sasquatch suit, and everyone was telling me, ‘You’re 6-5, 280. Put on the Sasquatch suit, run around campus and let’s see what happens.’ I never did it.”

Yes, FGCU was wild back then. In more ways than one. Stejskal still marvels at what was a dynamic, wide-open, free-wheeling, organically created place – a university where you could even start your own curriculum. Stejskal was and still is a weather nerd. As an undergrad, he interned at NBC2 because he thought he might be a meteorologist one day. He asked his adviser, Alice Brunner, if FGCU could offer a related course, and she said yes – if he could round up an instructor and at least eight students.

FGCU professor Mike Savarese teamed up with Jim Clarke, then a meteorologist at NBC2, and accepted Stejskal’s “invitation” to teach. They secured 10 students, and a course was born: “Climatology.”

“Go find me a university nowadays where you say, ‘Hey, can we have this class?’ and they say, ‘Well, find some kids and a teacher, and we’ll do it.’ And they actually do it, Stejskal says. “That was pretty cool. I go back to that all the time when I talk about FGCU.”

The future Christina Stejskal was a year behind him, arriving on campus in 1999. She was the first in her family ever to go to college, so the intimate, small-campus vibe suited her perfectly.

“Your professors knew you by your first and last name,” she says. “It wasn’t like you’d get at any other university. All the classes literally had less than 20 kids. I think they only had two or three lecture halls that held more than 50 kids.”

That dynamic proved to be a life-changing accelerant in a way neither could have expected. We’ll let her tell the story of how their life together caught fire:

“In January 2002, I had an environmental chemistry class. Literally, the first day I noticed Barrett because I was early, and he was fashionably late. I was sitting right up front because that’s the sort of student I was. He came in: 6-5, bleached-blond hair and earrings. He definitely stuck out. That day, Dr. Joseph Kakareka was talking about cars that have aluminum. I am a big car nut. I brought up the idea that Land Rovers are made out of aluminum as well.

» FGCU at 25: An incredibly rare piece of memorabilia

» FGCU at 25: Prof becomes one of first to achieve an unlikely honor

“We walked out after class, and Barrett went into a Land Rover Discovery, which my dad and brother had at the time. The next class period, I approached him about his vehicle because, of course, that’s kind of my thing. We essentially exchanged numbers, and the rest is history after that. Our second class of environmental chemistry basically became our first date.”

They married Jan. 15, 2006, joining what has become a long line of Eagle pairings; Alumni Relations estimates there are 400 Eagle couples in its database.

But we’re getting ahead of ourselves here. There is more to tell about the Stejskals’ FGCU days. They were blown away by the residence halls. Neither actually lived on campus, but they had friends who did, and they loved the vibe so much that they spent almost as much time there as the residents.

“The dorms were right near the beach area,” Christina Stejskal says. “That was a lot of the draw, and FGCU was one of the first universities to have apartment-style living for dorms, whereas at every other university, you’d be in a room with a bathroom down the hall. At FGCU, it was set up with an apartment, where you had three or four bedrooms and a shared bathroom, with a kitchen and living room area. As a freshman coming into college that was like staying at the Ritz-Carlton. It was amazing.”

In 2012, Barrett Stejskal formed BearPaws Environmental Consulting and serves as CEO and president, responsible for all management duties and project coordination. She helps out in her spare time, serving as chief financial officer. BearPaws conducts environmental evaluations, maps wetlands, develops plans for habitat management and assists clients with permitting.

Twenty years after leaving FGCU, they can still rattle off the names and spellings of professors, many of whom taught both of them: Greg Tolley, Aswani Volety, Mike Savarese, William Hammond, Edwin “Win” Everham. They were pioneers at FGCU. But so were Barrett and Christina Stejskal in their own way.

“I went to FGCU because my interests were environmental, so I was there when all of those programs were developing, like Panther Posse,” Christina Stejskal says. “Some of those educational programs developed as a result of things we did. We did some of the artificial reefs in Rookery Bay, which they’re still looking at for water quality. We were laying a foundation for future programs.

“I loved my experience at FGCU. I wouldn’t change it for anything.”