It was a moment befitting the collective greatness for which they were being celebrated.

Standing on stage to speak on behalf of the 2012-13 FGCU men’s basketball team at its induction into the FGCU Athletics Hall of Fame on Monday night, former Eagles players Brett Comer and Eddie Murray instead waved all of their former teammates in attendance on stage with them.

“I think it’s only right that we all stood up here together,” Comer said at the ceremony attended by about 225 in the Cohen Student Union ballroom.

Gathered in their largest group since the team’s famed Sweet 16 NCAA Tournament run gave rise to the Dunk City nickname almost nine years ago, seven players, four coaches – including former head coach Andy Enfield – and three student managers basked in the glory of a team and a time that represented so much to so many.

“It means a lot,” said Comer, FGCU’s lob-tossing point guard, now in his fifth season on the coaching staff at the University of Dayton. “Some guys can’t make it because they’re playing overseas. But it’s great to see people I really haven’t seen for about seven or eight years and reminisce on those memories.”

Joining their former teammates at the Nov. 15 event were Eric McKnight, Christophe Varidel, Filip Cvjeticanin, Marcus Blake and Nate Hicks, who sat out the 2012-13 season as a transfer but was part of the practice squad that helped push the starting unit.

“It’s a great reunion,” McKnight, who played professionally in Bolivia, Mongolia, Denmark and Ecuador and now is back in his hometown of Raleigh, North Carolina, said while marveling at FGCU’s many campus improvements since he last was in town seven years ago.

“It’s déjà vu, and it’s like a utopia. Everything is upgraded. It doesn’t look the same at all.”

Varidel flew in from his native Switzerland for the event.

“Just driving (here) reminded me a lot of the memories,” he said.

Murray, who is from Fort Myers and has lived and worked in the area following his playing career, said the team’s up-tempo, dunk-filled defeats of second-seeded Georgetown and seventh-seeded San Diego State have been proud, long-running icebreakers in business settings.

The wins made the Eagles, then in only their second season as a full-fledged Division-I program, the first No. 15 seed ever to reach the Sweet 16, a feat matched last March by Oral Roberts.

“It’s remarkable how many people grabbed on to that run. They really take pride in Southwest Florida and just love talking about it,” Murray said. “People seem to enjoy how much fun it looked like we were having out there … beating up on some of the big boys.”

Three of Dunk City’s biggest stars – Sherwood Brown, Chase Fieler and Bernard Thompson – were among those unable to attend while still playing overseas, although Comer said he talked by video conference with Brown and Thompson on his way to the induction.

Fieler’s mother, Jenny, attended on her son’s behalf. Former players Dajuan Graf, also still playing overseas, Alexander Blessig, Leonard Livingston Jr., and Jamail Jones, who also sat out the 2012-13 season as a transfer, also were not in attendance. A livestream of the ceremony also was available.

The long, successful professional careers it sparked are among the ways Dunk City impacted many lives.

“It changed everything,” said Michael Fly, now in his fourth season as FGCU head coach after spending seven as an assistant, including his first two on Enfield’s staff. “There were people in Southwest Florida who didn’t know where campus was. All of a sudden they were at the bookstore, and I couldn’t get my morning coffee because I couldn’t park anywhere.”

Next induction in January

Monday’s event was held to recognize the Dunk City squad separately from its fellow honorees in the inaugural class of the FGCU Athletics Hall of Fame.

“This event was too big for either (group) to be overshadowed by the other,” said FGCU athletic director Ken Kavanagh, noting that there will be “at least four or five” members of the Dunk City squad, including Enfield, who will be inducted in the future as individuals. 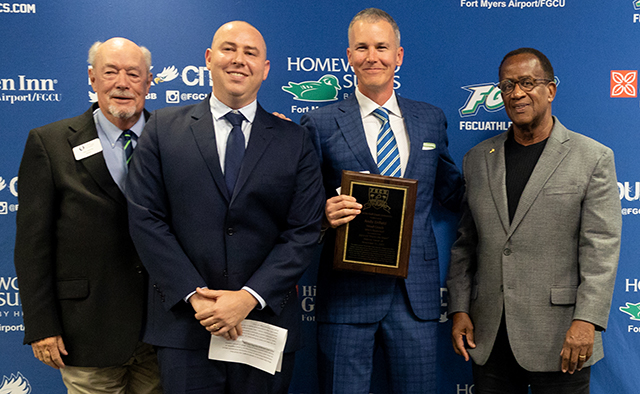 “Tonight the team is going in,” said Kavanagh, noting how FGCU was scarcely known by that four-letter moniker prior to the Dunk City season. “It was transformational. Not just what it did for our athletic department. The whole profile of the university got elevated.”

The Dunk City induction also was timed to coincide with Enfield and his USC program making good on their commitment to face FGCU in Alico Arena in support of his former program.

Enfield’s Trojans squad, which is ranked No. 25 in the nation and reached the NCAA Tournament Elite Eight in March in his eighth season in Southern California, faces the Eagles at 6 p.m. Tuesday, Nov. 16. A potential sell-out crowd is expected for the game that will be televised on ESPNU.

“There’s really no benefit for USC,” Fly said of an unheard-of modern occurrence: a power conference school playing at a mid-major. “This was, coach Enfield loves the university, loves the program. He’s been tremendous to me, still follows our program and wants us to be successful.”

‘A surreal feeling’ to be back

As with others, Enfield’s first return to campus in nearly nine years was sentimental as well.

“It was a surreal feeling,” he said of being in Alico Arena for his team’s practices. “I just looked around. I took a deep breath. A big smile came to my face.”

For the induction ceremony, where he was joined by his wife, Amanda, the former Wall Street executive and NBA assistant coach ditched the customary USC colors of cardinal and gold from his wardrobe in favor of FGCU’s green and blue.

“It feels pretty good,” he said.

There was plenty of laughter during the program, such as when Enfield poked fun at the irrepressibly idiosyncratic Varidel for dressing casually – in a deep-necked T-shirt, high-ankle pants and sockless loafers – to the slightly formal gathering.

And there was former FGCU President Wilson Bradshaw recalling after FGCU’s defeat of Georgetown how he reassured Enfield, “Don’t you worry. If you don’t win another game in this tournament, we’re going to double your salary.”

Enfield, then making less than $160,000, received a salary widely reported to be around $1.5 million when he left FGCU for USC after the Eagles lost to Florida in the Sweet 16.

“It was such a great time,” Bradshaw recalled of the first of three NCAA Tournament appearances the men’s program has made. “I think if we didn’t have the shelves bolted down in the bookstore, we could have sold those. It was so exciting.”

There were occasional tears as well. Those welled when the video highlights package (watch below) reached the moment when Enfield had to ask his crestfallen players to “please keep your heads up” following the Florida defeat.

Mostly, though, the evening was marked by unrestrained rejoicing over a team that followed Enfield’s skilled, charismatic example. That was one of unflagging confidence and togetherness in authoring a defining moment in Southwest Florida and college basketball history.

“It’s just a great honor to be here,” said Enfield, treated to standing ovations when taking the stage and again after his remarks. “It’s a great memory that we all have. I remember the players and how much they all believed in each other. It just turned into a team that thought they could beat anybody. When I think of Dunk City, that’s what I think of – our team.”