“The designation honors people who have gone above and beyond in their support of the university over a long period of time,” says Kitty Green, vice president for Advancement and executive director of the FGCU Foundation. “We deeply appreciate all they have done to make this the excellent institution it has become.”

Richard Ackert was a founding foundation board member. He is past chair of the FGCU Financing Corp. and was instrumental in creating student housing. The Commons Building in North Lake Village is named the Richard C. Ackert Community Center. He is the retired president and CEO of SouthTrust Bank and Alico Corp. board of directors. 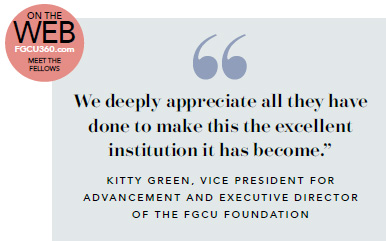 Linda Taylor was a founding foundation board member and vice chair of the FGCU Board of Trustees. A retired elementary school teacher, she served on the Florida Board of Education, as a trustee for the Foundation for Florida’s Future and for other educational causes.

Lee Seidler is a foundation board member and longtime donor for whom Seidler Hall is named. He supports an annual lecture series, film festival, art exhibitions and First Generation scholarships. An author on accounting and taxation, professor of accounting and Price Waterhouse professor of auditing at NYU Stern School of Business, he was a general partner and senior managing director at Bear Stearns & Co.

Charles Winton is a former chair of the foundation board, served as summer 2020 commencement speaker and provided cars to the FGCU Athletics department as well as scholarships. A certified public accountant, he is president of Estero Bay Chevrolet, and additional car dealerships and serves on the Minority Dealer Advisory Council representing the Southeast region of the United States.