Florida Gulf Coast University’s lifelong-learning program for Southwest Floridians is undergoing a renaissance, so to speak — a revival, a refreshing, a rebranding.

Known as the Renaissance Academy for two decades, the popular source for lectures, short courses, day trips and special events has been renamed FGCU Academy to more clearly define its relationship to the university and its value to individuals and the community.

An advertising and marketing campaign is underway to spread awareness of the transformation in identity as well as other changes in the program. A newly streamlined process of registration for hundreds of winter and spring offerings has begun. The course catalog, website and digital newsletter have been revamped. And, while many programs will be offered in person beginning this month, the majority will also be streamed live or on demand thanks to technological solutions spurred by the desire to facilitate learning during the pandemic.

The academy operates under the umbrella of University Advancement, which early last year began exploring ways to boost the profile of the program and fortify its association with the school. University Marketing & Communications partnered with the academy and interviewed students, speakers, community members and other stakeholders. Three conclusions came to light: Participants considered the programming beneficial; most did not see a strong tie to FGCU; and too many were unaware of the academy’s existence.

“With that research, their idea was, let’s keep ‘academy’ — we want to keep that recognition — but the ‘renaissance’ at this point in time seemed sort of dated and complicated,” Kitty Green, vice president of University Advancement, explained during an online open house in December. “If we could just call it FGCU Academy, that seemed much simpler and more obvious.

“We have the opportunity to make sure more of the community knows about it, and it brings more value to FGCU Academy members. They will be more closely connected with the Bower School of Music & the Arts, WGCU Public Media and the 900 faculty members we have that have all kinds of interests and information to share. That’s the goal — to bring the two much more closely together.”

Founded in 2001, the academy has grown exponentially over the years from a couple dozen classes presented seasonally in a single classroom to today’s 1,500 year-round offerings at a dozen locations from Marco Island to Punta Gorda. More than 12,000 people participated in wide-ranging classes in 2019, according to Director John Guerra.

“From fairly humble beginnings, the academy has grown into the region’s premier lifelong-learning program,” he said, explaining that former FGCU president William Merwin and founding College of Arts & Sciences Dean Jack Crocker launched the program. “They knew they wanted to reach out and engage in the community. A lifelong-learning program geared toward adult seniors and retirees seemed like a natural and brilliant way to achieve that goal.”

It’s a goal the academy has continued to achieve, in large part, while pivoting to remote programming during the coronavirus crisis. Academy staff and faculty quickly worked in tandem to establish platforms and protocols to ensure a successful transition for presenters and participants. With new content and new delivery systems, the academy was able to reach nearly 900 participants every month since the pandemic began, Guerra said, with a special added benefit.

“Our snowbirds can usually only participate in the academy while they’re here. They can now do so from anywhere in the world at any time,” he said. “Online programs are recorded and added to our ever-growing digital video lecture library. So now we can reprise our best programs through scheduled automated webinars or on-demand webinars available to students 24/7.”

Topics for the academy’s hundreds of programs continue to be as diverse and opportune as ever. Fans of Netflix’s “The Crown” might enjoy “Queen Elizabeth I: Challenges Facing A Female Monarch.” “Coping with Grief and Loss During a Pandemic” couldn’t be timelier. Ditto “Does the Electoral College Have a Future?” You can revisit history, upgrade your technological savvy and learn the ABCs of CDB.

In the words of the promotional materials, “Discover your inner passion, shape your mind and body or explore new places and cultures.” 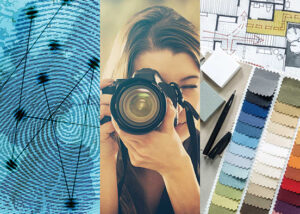 In-person classes will resume in mid-January at the Naples Center and Herald Court Centre in Punta Gorda — with greatly reduced class sizes, socially distanced seating, required masks, temperature checks and a plexiglass desktop shield for all speakers. Most will be streamed live  and recorded. Speakers have been working since spring to adapt their presentations for the new format and have grown comfortable with it — though they miss the face-to-face connections of in-person classes, where participants often build new friendships based on common passions.

“It’s a little different on a computer screen, but you make it work,” longtime academy faculty member Tom Eastwood said during the open house. “I really like the interaction with students. You really have to bring your A game because many of the people in the audience know quite a bit about what you’re talking about.”

A retired Internal Revenue Service regional director with four decades of experience in law enforcement and intelligence, Eastwood is just one example of the high caliber of lecturers the academy cultivates.

“We attract an incredibly rich and diverse set of individuals with a range of backgrounds, experiences and careers, and they are more than willing to offer up that knowledge and wisdom in the form of academic classes,” Guerra said. “They really enrich our programs.”

Academy presenters include FGCU faculty members who enjoy getting out into the community as well as engaging with a different kind of audience than the 20-year-old undergraduates in their campus classrooms. By representing their colleges and degree programs, faculty members also encourage affinity between academy students and the university.

Thomas Cimarusti, professor and program coordinator in FGCU’s Bower School of Music, was eager to get involved in a lifelong-learning program when he joined the university five years ago and has more than a dozen academy classes planned this year. Developing courses for FGCU Academy gives him the opportunity to learn new things, he said, as well as share passions with the kind of people who might be accustomed to patronizing New York’s Metropolitan Opera or the Chicago Symphony.

“It’s remarkably rewarding. They are there because they really want to engage in the class,” Cimarusti said. “I’ve noticed a real hunger for this sort of thing. When I meet people like that, they want to sit there and talk about Beethoven for two hours. Undergraduate students don’t have the time for that.”

In a fitting coda, he invoked a favorite quote that neatly sums up the catalyst for programs like FGCU Academy: “Learning never retires.” 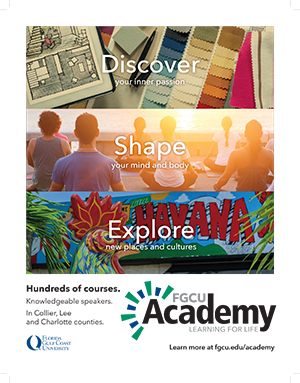 FGCU faculty and staff are encouraged to share their passions and expertise with FGCU Academy. Start by submitting a course proposal online.

FGCU Academy’s popular travel excursions are expected to resume later this year with trips to Portugal, Turkey, Sicily/Southern Italy and Egypt. Details will be shared in online and in-person open houses at the FGCU Naples Center, 1010 Fifth Ave. S., Naples: