New Everglades Wonder Gardens leader is a natural for the job

If you’ve ever trekked along the three-plus miles of nature trails snaking through the thick brush and tree canopies that beautify the Florida Gulf Coast University main campus, you can thank alum David Rahahę•tih Webb.

Years later, Webb, now 42, still is a nature trailblazer. His name in the Tuscarora language spoken by the Native American tribes to which he and his family belong — “Rahahę•tih” — literally translates to, “He makes the road.” And from his first job out of college, as a science teacher in the Lee County School District, through employment and consultant stints with the Collier County School District, Aquarium of Niagara Falls, Miami-Dade County, Conservancy of Southwest Florida, Naples Botanical Garden and Florida Museum of Natural History, Webb has continued to forge and lead the way along different pathways to environmental education and conservation. 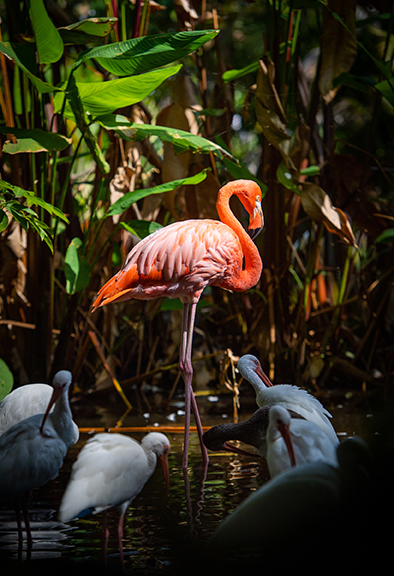 That 16-plus-years of professional experience now all comes into play at his newest job — executive director of the Everglades Wonder Gardens, the Bonita Springs zoological and botanical attraction that’s one of the last living vestiges of Florida tourism history. Originally named the Reptile Gardens when brothers Bill and Lester Piper opened it along the new Tamiami Trail (now Old 41 Road) in 1936 in downtown Bonita Springs, it was saved from extinction when local residents formed a nonprofit organization in 2014 and worked with the city to buy the property from the Piper family a year later, preventing the inner-city oasis from commercial development.

This new path in Webb’s career already is clear, in his mind. Although he has only been on the job as executive director for several weeks, his mission is to take the Wonder Gardens to another level as a centerpiece for education and conservation while maintaining, as he calls it, the “kitschy” atmosphere that charms a classic Sunshine State visitors’ stop that entertained countless thousands of tourists before the mega attractions such as Disney World, Sea World and Busch Gardens were even conceived.

“I love the historic, ‘old Florida’ feel of the Wonder Gardens, and treasure that as something unique, as an eighth-generation Floridian myself,” Webb said. Besides his Tuscarora ancestry on his mother’s side, his father is Meherrin Indian, and David is enrolled with both tribes. His grandfather’s family was rooted in Florida before it became a state.

The Wonder Gardens job is one for which you might say Webb was destined. 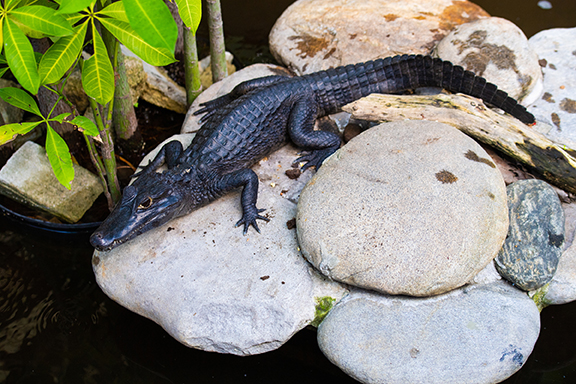 “I visited the Wonder Gardens as a kid,” said Webb, who attended Bonita Springs Middle School “just down the street” from the attraction when he was growing up in Estero, where his family “owned 22 acres off Corkscrew Road before there was any development.”

“I grew up loving everything that had to do with nature and wildlife,” he said.

Now, he gets to show that love in a place that truly will appreciate it. While much of the attraction’s buildings and wildlife habitats are visibly dated, the aged structures mix well with and enhance the natural beauty of a three-acre tropical jungle of exotic vegetation from all over the world.

“I believe in the importance of conservation and environmental education, and the Wonder Gardens is the perfect place for experiential learning,” Webb said.

Stroll along the paths winding through the Wonder Gardens and you’ll find African mahoganies, kapok trees, giant staghorn ferns, flowers, orchids, bromeliads and fruit trees that all thrive in the Southwest Florida heat and humidity, along with a butterfly garden. Large mammals such as Florida panthers and black bears no longer live here, but you’ll find the usual swamp reptiles — alligators, turtles, snakes, lizards and tortoises – many of which are Florida Fish and Wildlife Commission rescues. Adding color to the wildlife and foliage exhibits are scores of birds such as flamingos, wood ducks, Amazon parrots, cockatoos, rainbow lorikeets and peafowl that roam the property freely and charm visitors. 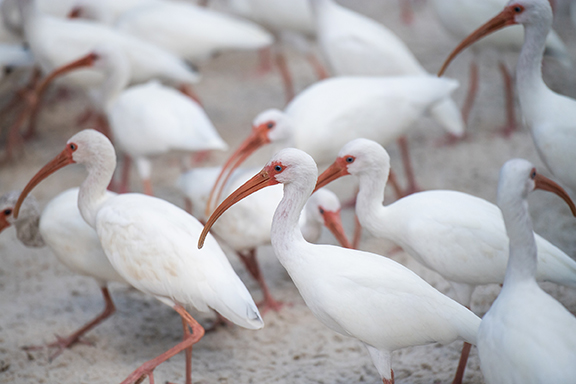 The educational mission of the Wonder Gardens is already evident. There’s a Kindernature program for children ages 3 to 5 to learn about the environment teamed up with an adult family member. Special programs scheduled include an Educators Night Out, a reception for teachers to network and learn more about the Wonder Gardens; while Cocktails & Conversation is a more informal educational program in a social setting. A special event set in November is geared toward Girl Scouts learning how to create and maintain a terrarium while earning a gardening badge. And beginning in December, an Afternoon Tea will take place every other Tuesday in the Gardens’ Tea House.

“I am fortunate to have an amazing team in place at the Wonder Gardens, and plan to work with them to take the organization to the next level and pursue AZA (Association of Zoos and Aquariums) accreditation,” Webb said. “One of the first things I do once onboard at an organization is professionalize the staff and exhibits, as well as protocols. We need to measure the impact of our programs for grant funding, and update several of our exhibits. With AZA accreditation, we can participate in conservation programs that enable us to participate in breeding networks of important species such as the American flamingo.”

Webb’s deep love of nature is a holistic extension of the Native American heritage he says is “inseparable from who I am as a whole human being.”

“It is not something that I merely embrace,” he said. “We are a living, thriving people with our language and culture intact. I am an enrolled citizen of my nation, and I speak my language. Equating indigenous peoples as things of the past, many people will often ask me about embracing my culture, or use the term, ‘descended.’ As a sovereign nation of living people, we are still very much here today. I am very active in my community’s ceremonies and powwows.

“As a student at FGCU, I was one of the only indigenous people on campus,” he continued. “My professors and mentors were amazing and often allowed me to share my perspective as an indigenous person, especially in terms of an environmental ethic. I would typically incorporate my culture into projects and share whenever I could. I love sharing in this way.”

Saying he was fortunate to attend FGCU in its early years, Webb — in his typical trailblazing fashion — was the first student assistant at the Center for Environmental and Sustainability Education (CESE), a place “near and dear to his heart” where he still serves on the board of advisors. He also has worked with the Whitaker Center in the past, and says he plans to reconnect with its director, chemistry professor Dr. Laura Frost, and offer service-learning, internship and volunteers opportunities for FGCU students at the Wonder Gardens.

Webb credits much of his early success to “amazing mentors and role models” who include his parents, the late Meherrin Chief Wayne Brown, who died in 2019 (“A great influence on me. He was an authority on our history and was always eager to speak truth to power,” Webb said) and his grandmother, Edythe Stokes, an avid conservationist who worked at the J.N. “Ding” Darling National Wildlife Refuge on Sanibel Island for more than 30 years, and to whom the administration building there is dedicated.

His mentors also include two legends of FGCU environmental education, professors emeritus Dr. Bill Hammond and Dr. Peter Blaze Corcoran, the latter also being former director of the CESE. “Dr. Hammond was a huge influence on my life as I was in his Lee County Schools Environmental Education Monday Group in high school,” Webb said. “During that program, we got Conservation 2020 (a land-acquisition and preservation program) started and worked with the Lee County Commission to get that initiative on the ballot, which later passed by popular vote. Dr. Corcoran is a lifelong friend and mentor, and I consider him to be among the world’s greatest environmental education experts and advocates.”

Another one of his FGCU influencers still on the faculty is Dr. Maria Loffredo Roca, associate professor and director of the Department of Integrated Studies. “David is an extraordinary young man who I have known since his time at FGCU as an undergraduate,” said Roca, a founding faculty member. “He is brilliant, creative and compassionate.  The Wonder Gardens has hired a true visionary and innovator.  I look forward to collaborating with him in his new position.”

The influence of Hammond, Corcoran, Roca and other FGCU mentors “too many to name,” according to Webb, is evident in a life philosophy gleaned from his experiences as an Eagle, educator and conservationist. Now, he’s about to forge yet another nature trail, leading Everglades Wonder Gardens into the future.

“Human beings are inseparable from nature.  We are just a miniscule part of the world around us, but today, we are harming Earth on a much greater scale than is sustainable,” Webb said.  “In my culture, we recite Gano:nyok, ‘the words before all else,’ before any important gathering, meeting or ceremony, or just at the beginning of each day. This Gano:nyok is also known as the ‘Thanksgiving address.’  I often share and recite Gano:nyok in my language as a way to acknowledge and thank all of the ‘life sustainers.’  This also reminds us of our place in the world, as we give thanks for human beings first, starting with the lowest and working our way up to the highest level.

“I believe it is critical for the survival of humankind that we realize our true place within the world around us, and remember to respect this,” Webb said. “While I may not share this with many people that I meet, I hope that this reverence for nature will spread through my work as an environmental educator.”