“Good. That was good,” the FGCU senior says as the students, all seated at cellos, follow her lead on a Friday afternoon in February in Immokalee. “Nice job. Right together. Keep going.”

During a pause for questions, one student lets a small, fatigued yawn escape. The 90-minute after-school session concludes a long day at the end of a long week for everyone.

But so mutually beneficial is the session – part of program that gives teaching experience to students from FGCU’s Bower School of Music while providing free lessons to second-year music students at Immokalee – that no offense is taken, and the lesson quickly resumes.

“The knowledge that the middle-school students take away is amazing,” said program founder and coordinator Judy Evans, a former FGCU adjunct instructor in string instruments and a long-time former public school teacher, including in Collier County.

“But the college kids are right behind them. They’re figuring out class management. They’re learning how to pace the lesson. They create their own lessons.” The majority of Bower School students are on the music education pathway, where the bulk of the jobs and often living wages lie. For some the master classes are their first formal experience as instructors. The program also provides a small stipend.

“The passion is there. They’re into it. They’re asking questions: ‘What else can I do? Who else can I listen to?’ It’s really fun for me to see how I can help. They see I’m showing them respect and they say, ‘I want to be like you. I want to be a teacher.’ It’s nice to hear.”
JESUS SEGURA, ’16 MUSIC EDUCATION

“I love it here. I love working with the kids,” said FGCU freshman James Tsang, a Naples High School graduate who plays the double bass and is working with just one Immokalee student on this day.

“Actually from doing this I was thinking of going into giving private lessons to kids. It’s amazing how fast they respond.”

FGCU freshman Ericka Gabrielli Velez, a viola player and graduate of Cypress Lake High School in Fort Myers with aspirations to conduct a high school or college orchestra, said, “People think teaching is easy. It’s not. Every time you do it you learn a little more about yourself as a teacher.”

To participate in the program, which is set in the spring semester, Immokalee students have to have demonstrated a desire to practice and improve over their 18 months in music.

All of the participants, which Immokalee Middle orchestra director Angel Colon said represents about half of his second-year students, also are chosen because they can’t afford private lessons. That serves as a nice ancillary reminder to the future instructors, Evans noted.

“Talent knows no zip code,” she said, thinking back to students from lower-income families she’s taught in past programs. “I had to kick them out of the room to go home at night.

“These kids are so nice, and they’re eager and they listen,” Evans said of the Immokalee students. “They go home and practice the technique and their scales.”

The impact, all parties say, is significant, for the present and future. “It’s been very helpful,” said eighth-grade tuba player Jadzia Hernandez, who was among seven students practicing with FGCU’s Evin Exposito on the tuba and bass clarinet.

“I feel more confident with my breathing. At times I’ll shrink back. My counting getting back (to playing) is a lot faster than it was before.” 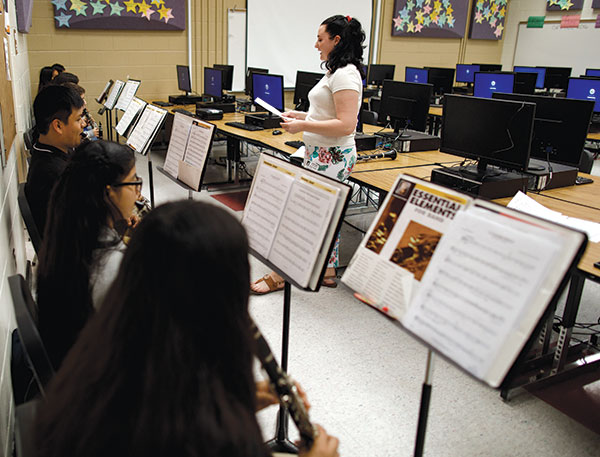 “They’re teaching us how to stick together, how to hit the notes we can’t hit usually,” Jimenez said. “We’re getting better.” Because orchestra and band classes are held in large groups, the master classes also give the Immokalee students critical time in smaller groups, organized by instrument.

“When we’re in the band room, it’s very helpful. But they have all the other instruments in there as well,” Hernandez said. “I’m getting a lot more attention to my specific problems.”

Beyond their improved confidence and skills, the younger musicians also are having their eyes opened to futures they never knew existed. Or at least never thought were realistic for them.

“You can go into careers,” said Nathan Sinor, joined by fellow eighth-graders Alexis Ayala and Isaiah Casillas in explaining part of the impact from cello instructor Neill.

“She started in sixth grade and she’s still playing,” said Sinor, who hadn’t considered a music career because he “didn’t really know how to get into it.”

Ayala like others said she’s looked into private lessons but hasn’t been able to take them.

“I have other important things going on, like work,” she said.

Colon said some of his students have been inspired to the point of seeking out classical music pieces to watch on their own.

Such impacts leave the FGCU students wondering if they’re the ones benefiting most.

“We’ve all been through that struggle trying to learn one part and not getting it, and your teacher somehow solves all your problems and fixes that one mistake,” Velez said. “You see that they finally get it. You see them light up because they’re so excited.”

Perhaps no one knows that better than Jesus Segura. A former member of the Immokalee middle and high school bands, Segura earned his bachelor’s degree in music education from FGCU in 2016. He went on to land the job as music director at Eden Park Elementary in Immokalee.

Now he returns with current Bower School students to help inspire the next generation of young musicians in his hometown.

“I sat right up there,” said Segura, pointing to the seat where he played trombone in the band room at Immokalee Middle.

“The passion is there. They’re into it. They’re asking questions: ‘What else can I do? Who else can I listen to?’ It’s really fun for me to see how I can help. They see I’m showing them respect and they say, ‘I want to be like you. I want to be a teacher.’ It’s nice to hear.”

It takes a village

Program founder and coordinator Judy Evans hopes to find a sponsor to cover the small cost to establish a similar program in Lee County.

“It could really affect a lot of students and certainly encourage them to keep playing,” 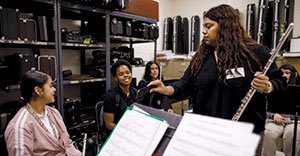 Evans said. “I’m very willing to train staff.” Evans, a lifelong music educator and director of outreach for the Music Foundation, first brought Bower School students to Immokalee in 2008 to help provide violin lessons for 4- and 5-yearolds from lower-income families.

Today, she comes armed with mountains of research showing the developmental and academic benefits for children exposed to music at young ages.

“If you can play the violin or piano for one year before the age of 5, the left and right brain make many more connections,” said Evans, founder of a program, MusicScores, that provides free, twiceweekly violin lessons in Collier County pre-kindergarten programs.

“It’s not just the academic part. It’s the emotional part. Music gets us through the times when we’re really low, and it also helps us celebrate the highs. It’s amazing.” 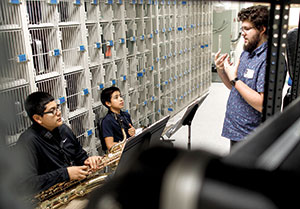