Medieval combatants fight to ‘the death’

But it’s all in fun and foam rubber

The Medieval Foam Fighting Club was started to give students a fighting chance. Between 12 and 15 members use foam-wrapped swords, lances, daggers, arrows and even soft fabric “rocks” twice a week to release their frustrations on the battlefield (Rec Field 1 or 2). For the most part, no one gets hurt, despite fighting to “the death.”

“We use medieval weapons that are all foam,” says Club President Holly Hurlbutt, (’20, Civil Engineering). “Instead of padding the people, we pad the weapon.” 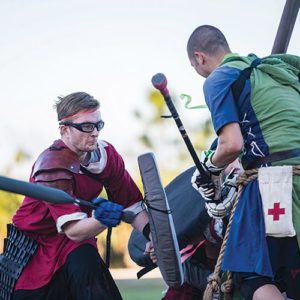 Ryan Fox (’17, Environmental Studies), founder of the FGCU club, heard about the sport from a friend at another university. He started a small group at FGCU in 2014.

“Participants are interested in live-action role playing,” he says. “They are people who didn’t think D&D (Dungeons and Dragons) was cool enough because you sat inside all day. It takes a lot more energy than you think. I lost 40 pounds in the first year.”

Now a park ranger at Lover’s Key State Park in Bonita Springs, he is the group’s coach and mentor for other area clubs.

Hurlbutt was a freshman when she first saw them fighting. “I thought it was the coolest thing in the world,” she says. The student with long, curly, red hair and blue eyes watched and joined the next week.

“It’s a great way to express yourself. When you are out there hitting people, you get out of your head.”

But the club can involve the heart. Hurlbutt and Fox became a couple after meeting on the battlefield. “I love it so much,” Hurlbutt says about the club. “I’ve made so many friends, not just here, but other colleges and other states.”

Started as a Registered Student Organization, the group became a Registered Sports Club through Campus Recreation in 2016. In exchange for requirements, such as service learning, the group receives funding for equipment and travel. 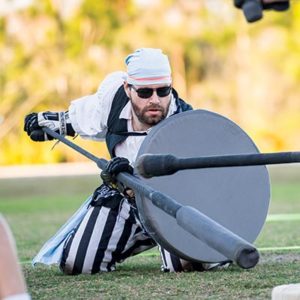 In February, the club from Florida Atlantic University came for a Day Battle at FGCU, with another scheduled in April. The FGCU club took some members to Trenton, S.C., to a regional event expected to draw 200 to 300 combatants.
Fighting, weapons and garb are regulated by Dagorhir Battle Games, an organization for live-action role-play combat. Rules of fighting and how points are awarded are
based on honor and safety. Hits to certain body parts are instant “death,” while strikes to the limbs require fighters to drop to their knees or put a hand behind their back. Battles are based on scenarios that could include capture the flag or bridge, king of the hill and other games.

The honor comes in determining points. When a Herald, who acts as a referee, isn’t present, it’s up to the participants to determine if weapon hits are of “sufficient force” to be worthy of points.

“It’s an honor-based sport,” Hurlbutt says.“The person who gets hit determines if it is a good shot or not.”

Everyone who participates must sign a waiver. Injuries are rare but do happen. During this interview, Hurlbutt was recovering from a knee injury caused when her shield broke and she tripped. “There aren’t that many injuries in what we do, but you can break a finger, roll your ankle or take an accidental head shot.”

Each participant creates a character for their battles. For competitions and gatherings, they wear hand-made, period-authentic costumes, and leather and metal armor, all governed by Dagorhir rules.

Hurlbutt, a skilled seamstress, is often hired by members to create tunics and shields. “I’ve made a side business out of it,” she says. “I take satisfaction in making things with my own hands. There’s a lot more to it than just fighting.”