In May 2015, one day after graduating from West Essex High School in North Caldwell, N.J., Jakub Adamowicz jammed the material portion of his life into every square inch of his car and drove for 22 hours straight to the FGCU campus.

That’s how fired up he was to start his undergraduate career in a state he had visited only once before.

Almost four years later, as he prepares for a May 2019 graduation ceremony, the son of first-generation Polish immigrants has a stunning resume:

Of course, this isn’t exactly how he had charted his master plan, which was to earn a master’s in architecture, move back to New York and work for his father or another company. And that’s the intrinsic beauty that Adamowicz treasures.

He started at FGCU as a double major in civil and environmental engineering. On the side, he earned his real estate license at age 19 and quickly sold three properties. He saw the potential, but wanted to do more.

After his freshman year, he found his calling in the Runway Program — in which students work on the development of a business idea and design a complete launch plan to start their business while still earning a degree.

“Initially, my goal was to sell million-dollar houses in Naples to kick off my real estate career,” he says. “But as I was sitting through that orientation for the Runway Program and I saw the resources that were being provided and the support it had from the community, I realized that if all I did was just sell more houses and bigger houses, I’d be wasting this opportunity.”

Adamowicz poured his heart into the Runway Program and came up with the idea for RoomDig. He canvassed the opinions of other students and realized he was onto something really big.

“Almost everybody I talked to had an issue with housing and roommates, or could name three people off the top of their head who were having issues,” Adamowicz says. “I listened to what everybody told me and utilized all the resources I had here.”

But during his sophomore year — burdened by an inflexible schedule that wasn’t allowing him to develop RoomDig — he contemplated leaving FGCU. That’s when Dr. K stepped in. Sandra Kauanui, director of FGCU’s newly created Institute for Entrepreneurship, told him her story: that she dropped out of college and regretted it, even though she ultimately earned her undergraduate degree and Ph.D. after launching her business.

He decided to abandon engineering, enter the entrepreneurship degree program and utilize its vast resources, along with Dr. K’s close guidance.

Adamowicz continued to refine his RoomDig idea. Then, using $8,000 he earned from the entrepreneurship pitch competition at FGCU and also from winning a pitch competition at the University of South Florida, he launched RoomDig late in 2017. Within four months, RoomDig had 4,000 users with a 60% active user rate.

“That was mind-blowing,” Adamowicz says. “We weren’t even expecting that. Our coding expertise wasn’t that good, so we were not expecting that many people on it, and so our database crashed. Over the summer, we had to rebuild the entire app and platform from the ground up so it was built for more users. We had been thinking, ‘Hey, we’re college students. This isn’t anything too crazy. We’re not Facebook.’ We were expecting small growth and to change gradually. I’m grateful it happened the way it happened.”

RoomDig ended up being accepted into the online version of Y Combinator’s Startup School, which has produced companies such as Airbnb, Dropbox and Reddit. And based on his experience there, Adamowicz gives FGCU’s entrepreneurship program the ultimate endorsement.

“What we’re learning at Y Combinator’s Startup is identical to what we’re learning at FGCU,” he says. “All our professors in the entrepreneurship program are teachers and previous business owners. They understand that starting a business and going to school is very difficult. They’re both kind of full-time things. Unless you don’t sleep, it’s a little difficult to do. So when you have understanding professors who have been in your shoes and are flexible and really care about your success, it makes all the difference. Our hard work behind the scenes is a lot easier to do, knowing we won’t get penalized for going above and beyond.”

In a one-year period, RoomDig won six pitch competitions, including the Florida Governor’s Cup, where it triumphed over startups from all the state universities, including those from Florida State University, which had received $100 million in funding over 10 years for its entrepreneurship program. 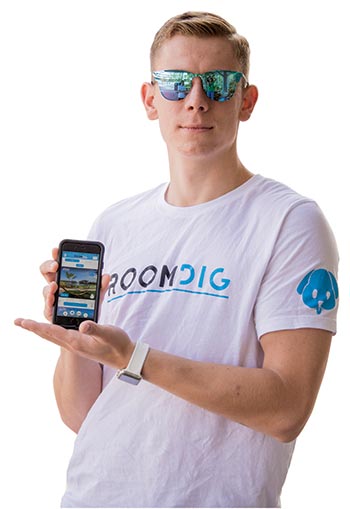 “That’s an incredible accomplishment and feat, not just for us, but for FGCU,” he says. “It says a lot about the program, resources and the quality of information and education that is being given to us. Incubators like this rarely exist in the world, let alone in a university ecosystem. I really believe this is going to change the economy in Southwest Florida.”

Adamowicz says that after he graduates in 2019, his goal is to place RoomDig’s headquarters right next door to FGCU’s campus and take his creation to another level. None of this surprises Dr. K.

“He’s extremely passionate, has a purpose and is highly motivated,” she says. “He loves FGCU and loves the community that supported him. He’s one of our success stories in the entrepreneurship program. He has utilized every resource he could get here to help him move forward.

“He keeps telling me, ‘When I make a lot of money, Dr. K, I’m going to give it back.’ To me, that’s a testament to him and his work ethic and how he feels about things. He really does totally appreciate it. I’m not sure he would have stayed in college if he had not had this opportunity in the program, because he was making money as a real estate agent. We were able to home in on all his skillsets and actually let him to “learn by doing” while he was in school, and that made a big difference.

“He’s your typical entrepreneur that would have outgrown going to college. That happens often with very successful entrepreneurs. They don’t have the patience with staying in school because they have a vision and want to move forward. But from where he started to where he is today, it’s been a wonderful transition. We’ve really been able to help him, and he has just soaked it up.”