Two firsts happened at 10:56 p.m. July 20, 1969: Astronaut Neil Armstrong, along with Buzz Aldrin, walked on the moon, and in doing so, created a vivid first memory for a star-struck 4-year-old boy.  Forty-eight years later, that child is a professor at Florida Gulf Coast University on the verge of beginning a project with NASA.

While the Apollo mission planted the seed, FGCU’s Derek Buzasi’s first experience with a telescope nurtured his fascination with stars.

“My third-grade teacher’s husband, Mr. Harper, taught eighth grade and had a small telescope. He gave the school the chance to see it during an open house. Once I looked through it, I was hooked,” Buzasi recalled.

While that instrument put him on a path to earn his Ph.D. in astronomy from Penn State University, work as a visiting senior scientist with NASA and serve as a professor at the U.S. Air Force Academy, another small telescope helped him save an otherwise catastrophic NASA-led satellite launch in 1999.

“Where NASA saw disaster, however, Derek Buzasi saw opportunity,” proclaimed a press release from the University of California, Berkeley, where Buzasi worked as a scientist at the time.

The satellite, known as WIRE – the Wide-Field Infrared Explorer– was supposed to “conduct a deep infrared, extragalactic science survey,” according to a NASA report. A “design error” caused a major failure, and it seemed all was lost. Nevertheless, Buzasi remembered there was a small telescope attached to the satellite for navigational purposes.

“Derek came up with the idea back in the ’90s to use that little telescope on this failed satellite to observe bright, pulsating stars all over the sky,” said Travis Metcalfe, senior research scientist at Space Science Institute.

Buzasi’s “clever and motivated suggestion” turned WIRE into “an unplanned pioneer in the field of asteroseismology,” according to the book, “Asteroseismology.”

“Essentially, [asteroseismology is] as simple as studying how does the sound of the star vary with time,” said Tom Barclay, deputy director of NASA’s Transiting Exoplanet Survey Satellite (TESS) Guest Investigator program. “By measuring, simply, how sound travels through the star, you can understand something about the composition of the star. By understanding composition and density, you can understand what it’s made from and how big it is.”

UC Berkeley reported Buzasi was the original astronomer to “observe a nearby cool star and record starquakes,” which are tremors on the surface of a star. The university also quoted Pierre Demarque, Yale University’s Munson professor emeritus of astronomy, who said, “What [Buzasi] has done can only be done from space–it’s a first.”

Nineteen years later, Buzasi is revisiting his pioneering research through a new project with NASA’s TESS.

“TESS is a planet-finding mission, but my involvement isn’t on the planet-finding side,” Buzasi, FGCU’s Whitaker eminent scholar, said in a recent interview.

Using data from TESS, Buzasi will observe stars every two minutes to determine their size, consistency and composition. He will then compare the new data with his findings from 1999. Buzasi expects the research will help scientists better understand a few very bright stars that have “a big impact on the evolution [and formation] of the galaxy.” TESS will also deliver data on stars that will eventually explode — called supernovae.

“I think Derek’s research is extremely exciting. And for me, personally, one of the most exciting projects because it’s quite different to a number of the others we’re typically funding. This particular research is looking at data that was collected 20 years ago and comparing it to data we’re going to collect later this year and to look at how things vary. To me, that’s extremely novel and an extremely good use of NASA’s resources,” Barclay said.

Dubbed “Revisiting The Past: B Star Asteroseismology With TESS,”Buzasi’s project is one of only 38 chosen for cycle No. 1 of the TESS Guest Investigator program. Guest investigators are permitted “to participate in science investigations using TESS, outside of the core mission science goals,” according to NASA.

Much as they currently work with data from NASA’s Kepler satellite, FGCU students will soon be part of the research Buzasi conducts using TESS.

“Students help write software. They help analyze data,” Buzasi said. “They help work with the data to make sure it’s in the condition we need it to be. Students are involved and will be involved every step of the way.”

Perhaps most exciting for the FGCU astronomer is the chance to revisit his groundbreaking work.

“All the stars that are part of this program are stars I observed with WIRE,” Buzasi said. “Normally, astronomers think – and the general public thinks – of stars as objects that change very, very slowly. And that’s true for stars like the Sun, but high-mass stars evolve and live lives that are much shorter. After 15 to 20 years, for some of these stars, we expect to see changes. We expect to be able to detect internal structural changes through seismology.”

It will be, according to Buzasi, one of the first times scientists will observe stellar evolution in real time. 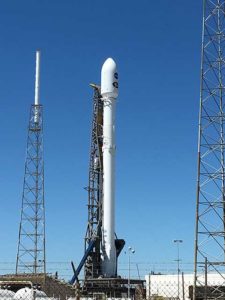 SpaceX Falcon 9 is poised to carry TESS in orbit. 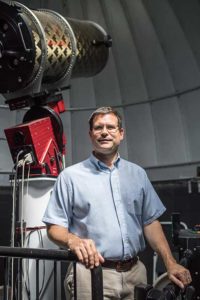