Check your everyday reality at the door of the U.A. Whitaker College of Engineering’s VIPER Laboratory and enter a world of virtual reality.

In VIPER Lab, you can put on a pair of three-dimensional glasses and use a hand-interaction wand to move virtual furniture around a virtual room or virtual buildings around a virtual college campus.

It’s virtual reality, and it’s a lot of fun, but it’s not a game.

The lab’s acronymic name indicates that the College of Engineering is doing serious stuff with virtual reality: VIPER stands for Virtual Interactive Portal for Engineering Research.

For those unfamiliar with the technology, virtual reality (or VR) is a computer-generated three-dimensional environment that a person can interact with and explore. A key word in VR is immersion, which is the perception of being physically present in a world that is simulated by software.

To many people, virtual reality means games such as “Robo Recall,” “Need for Speed No Limits” or “Star Wars Battlefront: Rogue One X-Wing VR Mission,” but to the more serious-minded, virtual reality is a technology that’s becoming a powerful force in business environments, including engineering, architecture, education and medicine.

One of VIPER Lab’s primary goals is to prepare students for this virtual reality business world. 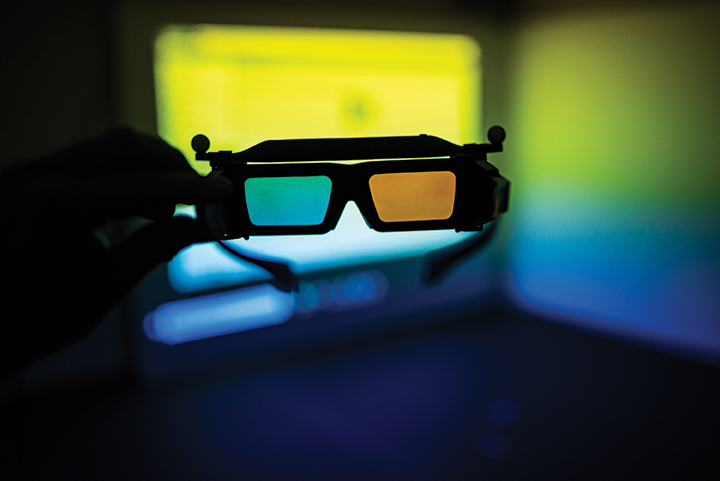 “Virtual reality is the future,” said lab manager Antuan Vazquez, who loves virtual reality games but doesn’t have time to play them.

“We want students to be able to understand how this technology is being used by those at the cutting edge in the real world. We want them to be a step ahead so they’re not training when they get to the job site. Our students are developing 3-D models, learning the basics of how to create a virtual world.

“We want our engineers to be able to develop virtual reality, including games. As the world goes more and more into VR, this experience will make them more employable.”

Among current student projects is a virtual-reality model of FGCU’s campus being created by software engineering majors.

“The purpose of a 3-D model of the campus is, if the university wants to add a building, we can add it in 3-D to see how it looks,” said Vazquez, a graduate of Ida S. Baker High School in Cape Coral who also holds a bioengineering degree from FGCU.

Software engineering students are also working on a math game called “Math Worm” aimed at fourth-graders. The game is based on the popular “Temple Run,” a 3-D “endless running” game in which the character, operated by the player, steals a golden idol from an Aztec temple and tries to escape while being chased by The Evil Demon Monkeys.

In “Math Worm,” “the avatar is riding a worm down a corridor while apples with math questions, say ‘two times four,’ are flung at the worm,” Vazquez said. “The worm must avoid the apples with wrong answers on them and catch the apples with the right answers. As the kid gets more answers right, the speed increases, and that makes the kid faster in math.”

Students from the Department of Environmental and Civil Engineering who are interested in water management and flood control, for example, could create 3-D models of coastal communities to demonstrate how storm surges from different hurricane categories would affect them.

“Then you could bring in policy makers and say, ‘Hey, here’s your city, and these buildings will be flooded if you don’t take this action,’” said Vazquez. “That would motivate policy makers to take action.

“Or, for bioengineering courses, it would be amazing to show students 3-D models of the human heart. It’s hard to understand the anatomy of the heart from a 2-D picture. With a 3-D model, you can show the ventricles and valves.”

Vazquez hopes VIPER, which became operational in February, will have impacts beyond FGCU.

“A lot of things are dangerous or are unfeasible due to the cost, so you use virtual reality,” he said. “One of our goals is to involve companies that are already using VR or are interested in working with VR. Companies can use our facility for VR projects – this equipment is very expensive, and not everybody can afford it – and we hope to use resources from the community to teach our students.”

VIPER Lab is built around Corner Cave, a product of virtual reality innovator WorldViz (in VR-speak, CAVE is actually an acronym – often lower-case except for the “C” – for Cave Automatic Virtual Environment, and a Corner Cave is a cave that fits in the corner of a room).

The Corner Cave consists of a series of projectors that project images onto walls, and a motion tracking system, a series of networked cameras that track the movements of users in real-time, so they can move within the 3-D environment.

And, because sound is important to any virtual reality experience, VIPER uses a Dolby Atmos surround sound system, which produces sound in a three-dimensional space – one reviewer said Dolby Atmos “will allow you to hear sound in a 360-degree bubble.”

A virtual reality laboratory equipped with Dolby Atmos should be a big draw for potential engineering students, said Richard Behr, dean of the U.A. Whitaker School of Engineering.

“We have open houses every semester called Eagle Expo; we had one in February, and the VIPER lab was a big attention getter,” Behr said. “This state-of-the-art technology is very useful in recruitment.”

Behr said VIPER will have a major impact on the engineering college.

“It has widespread applicability in all engineering disciplines,” he said. “It can be used to simulate construction sites; you walk through the site in a virtual environment, and you can mitigate problems on the site during real construction. But you can also apply VR to civil engineering and environmental engineering.

“In bioengineering, instead of looking at a construction site, you look inside a human body. Or in environmental engineering, you can study pollution and climate change. And software engineering: The whole facility is orchestrated by software.”

In all, the set-up cost more than $200,000, a one-time allocation from the state in preparation for introducing a Construction Management program in the College of Engineering.

Behr said that the construction management undergraduate degree program will commence at FGCU in fall 2019.

Given the ongoing projects, future projects, and recruiting potential of the VIPER lab, Behr and Vazquez are obviously excited.

“Virtual reality is a technology that’s amazing to a lot of people,” Vazquez said. “It’s drawing a lot of attention, attracting a lot of interest. When a lot of bright minds are drawn to it, a lot of good things will come out of it. And, when we have involvement with companies and the community, a lot of cool things will be happening in this lab.”

But while the VIPER lab is up and running, and students are already involved with projects, there is still plenty of work to be done, Vazquez said. Putting a virtual reality lab together requires a lot of trial and error.

“This is bleeding-edge technology, not cutting-edge,” he said. “A lot of things can go wrong that you have to fix. That’s where the bleeding comes in.”