When I drink, I think; and when I think, I drink.

French Renaissance writer Francois Rabelais wasn’t a student at FGCU when he said that in the 1500s, but he was on to something. Perhaps the most personalized props on campus besides cellphones are bottles, cups, tumblers and travel mugs, and the only thirst tougher to quench here than the one for knowledge is that from campus treks in 90-degree heat.

For Andrew Scavelli, a senior from Palm Harbor, majoring in communication with a concentration in public relations, his silver metal bottle flashes the old-school logo of his favorite football team, the NFL’s Tampa Bay Buccaneers. 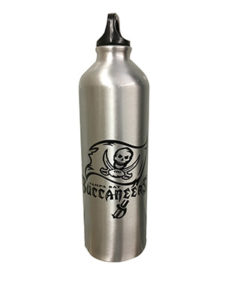 “For most of my life, I’ve been a big fan of the Buccaneers, and over the years I’ve collected all sorts of memorabilia,” Scavelli said. “I honestly don’t like the team’s new logo and uniform design that was released in 2014, so most of the stuff I have was made before then.”

Speaking of new branding, the U.S. Navy recently unveiled its latest recruiting slogan, “Forged by the Sea.” So, in the case of drink containers made and self-marketed by a sailor, the slogan “Forged by Toni” might be appropriate. 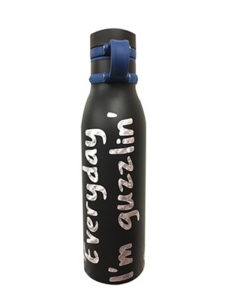 “I sell them on Etsy (an online marketplace), and I also have them listed on a Facebook page I run,” said Toni Rozelle-Rosio, a Reservist Electronics Technician Second Class who served six years active duty in the Navy and is a junior majoring in computer information systems with a minor in digital media design.

Using a silhouette craft cutter her husband bought her, Rozelle-Rosio creates drink holders she customizes – either with her own favorite slogans or pick-your-own – for prices up to $30, depending on the vessel and size. “I have a bunch of other things that I want to create, but have not had the time to do so,” Rozelle-Rosio said. “School takes priority.”

We’ll join French writer Rabelais and certainly drink to that. To go.