‘FGCU at 20’ documentary explores our beginnings

WGCU Public Media will host a community premiere of its latest documentary, “FGCU at 20: The Beginning,” on Thursday, Aug. 17 at 5:30 p.m. at the Myra Janco Daniels Public Media Center at Florida Gulf Coast University.  The public is invited to attend. 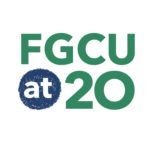 “FGCU at 20: The Beginning” chronicles the challenges of creating a new university on the cusp of a new millennium in one of the fastest growing states in the country. As the first university built in the Sunshine State since environmental permitting laws were enacted, FGCU’s backstory goes well beyond the signing of its authorizing legislation in 1991. The 30-minute program features interviews with founding FGCU faculty and staff as well as political and community leaders. Included are: Roy McTarnaghan, FGCU’s founding president; Keith Arnold, member of the Florida House of Representatives (District 73) from 1982 to 1998; Charlie Edwards, former chair of the Florida Board of Regents; and Ben Hill Griffin III, chairman and president of Alico Inc., which donated 760 acres for the campus.

Support for “FGCU at 20: The Beginning” comes from the Florida Gulf Coast University Foundation; Buchanan, Ingersoll & Rooney; and Jason’s Deli.

The community premiere is free, but reservations are required at wgcu.org/events or by calling 239-590-2510.

WGCU is Southwest Florida’s source for PBS and NPR programming. As a member-supported service of FGCU, WGCU’s mission is to provide educational programming that inspires, informs and engages the community. It serves seven counties, one-fifth of the state of Florida, with four distinct digital TV channels, two FM radio channels and three HD radio channels, a monthly magazine and a website. More information is available online or on Facebook.