Ohio couple’s gift to FGCU yet another victory

If you want to measure the national impact of FGCU’s “Dunk City” men’s basketball run to the NCAA Sweet 16 in 2013, consider the influence it had on Ohio residents Dr. Alise G. and David W. Bartley.

The Bartleys had no connection to FGCU or Southwest Florida – nor were they even big college basketball fans – when they happened to see NBC’s “Today” show capturing the excitement Dunk City was bringing to the campus and community as the only No. 15 seed in history to win two NCAA Tournament games.

The young Florida university whose students and community supporters turned out before dawn to cheer on the team on national TV grabbed the Bartleys’ attention and they didn’t forget. 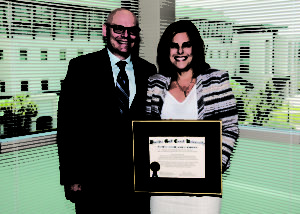 Alise Bartley is an educator, therapist and counselor who recently retired as a part-time faculty member at the University of Akron, where she earned a doctorate of philosophy, She is a private practitioner at The Relationship Center in North Canton. David Bartley is chairman of Ohio Gratings, a manufacturer of custom bar grating and was recently named EY Entrepreneur of the Year for Northeast Ohio in the family business category. He also owns Waco Products, a Maryland-based company that specializes in design and fabrication of aluminum structures.

“As we started re-evaluating what we wanted to do with our lives, we knew we wanted to be involved with a state school, not a private school, so we did some research and liked what we saw,” Alise Bartley said. “We decided this would be a great place to get involved.”

“We’re committed to passing on what we’ve learned, and to share our fortune with others,” David Bartley added.

So three years after seeing what they described as the “amazing energy” being generated 1,000 miles away from their Ohio home at an up-and-coming state university on Florida’s southwest coast, the Bartleys “cold-called” University Advancement and said they wanted to get involved with FGCU.

Inspired by Alise Bartley’s educational experiences and her positive impact on others through therapy and counseling – in particular her area of personal expertise, marriage and family counseling – the Bartleys this past June finalized a $1 million gift over five years for FGCU’s Elaine Nicpon Marieb College of Health & Human Services.

“We are so pleased that David and Alise recognized all our stellar university has to offer, and became engaged in its continued success with an investment that will enhance and expand important programs,” FGCU President Wilson G. Bradshaw said. “We are grateful for their confidence in us, and look forward to a long relationship with them.”

The gift will be used to expand faculty and staff resources; create scholarships through the Alise and David Bartley Scholarship Endowed Fund for Marriage and Family Therapy and the Bartley Restricted Fund for Behavioral Health; fund program development and advancement, and create development and professional opportunities for students.

“This means an awful lot to the college, and the Department of Counseling in particular,” said Mitchell Cordova, dean of the college. “This gift is transformational. It will elevate our graduate counseling programs to a whole different level. It’s just unbelievable. We’re so appreciative.”

Besides the educational boost they’re giving Southwest Florida, the region is  gaining two full-time residents in the Bartleys, who recently bought a condo in Bonita Springs and plan to relocate from Ohio in the next year.