A fresh coat of gratitude

A fresh coat of gratitude: Alumna Liz Perez-Lavin and Service Painting of Florida color our world 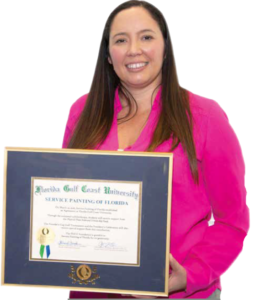 Inspiring those who inspire others – that’s The FGCU Effect. You’ll see those words woven throughout FGCU marketing materials. Meet Liz Perez-Lavin, the personification of The FGCU Effect. A native of Chile, and a mother at 18, she enrolled at FGCU because she needed to attend a college near her Naples home.

“My mom (who taught English as a second language) worked her schedule around my class schedule so I could attend FGCU and earn my degree,” said the Barron Collier High graduate. Guided by that loving mother, FGCU Foundation scholarships and her own work ethic, PerezLavin earned an accounting degree with honors in 2003, and went on to become an accounts manager for a remodeling contractor. A few years later, she was ready for more.

“I was looking for a job in management, as a controller,” Perez-Lavin said. “Service Painting was the perfect fit. My dad owned a painting company, and I worked as a painter to help get myself through college. So I was able to bridge the office and the field and bring them together.”

The young executive took to her new job like flat coat applied to a concrete wall, soon coloring her company resume with an appointment to its board of directors in 2010. Three years later, she was named president of one of the state’s largest commercial painting contractors with headquarters in Fort Myers and branch offices in Miami and Sarasota. And in keeping with The FGCU Effect’s larger philosophy to give back to the community, LavinPerez is active in several industry organizations and with her alma mater.

Service Painting’s partnership with FGCU predates her, as the company has been a university supporter for 11 years, donating more than $140,000 for various campus initiatives. Now that an FGCU alumna calls the shots, the company has stepped up its involvement, recently pledging $110,000 over five years to support the Physical Plant Endowed Scholarship Fund, the Founder’s Cup Golf Tournament (of which Service Painting is the official 2016 shirt sponsor) and the President’s Celebration. Perez-Lavin also serves on the board of advisors for the Eagles Club, FGCU’s athletic-booster organization.

“One of the things that first attracted me to work at the company was that it had been such a great supporter of FGCU, and they really were proud of that when I interviewed,” she said. While Perez-Lavin might have enrolled at FGCU out of necessity, what she gained from the experience isn’t lost on this grateful graduate, who with her husband, Harvey, raises daughters Angelina and Daisy.

“I loved the access I had to my teachers, the smaller class sizes,” she said. “And I found that many of my teachers had professional work experience, which was a big help to me. But I think the skill I acquired that I appreciate the most is public speaking. When I came to FGCU, I was a terrible speaker. When you’re a builder, you have to be comfortable facing groups of people. FGCU made me a better communicator, more confident in what I was saying, and that has carried with me throughout the years.”

Perez-Lavin is particularly proud that some of her company’s gift to FGCU goes toward the Physical Plant Endowed Scholarship Fund. “It’s helping people who are working in, and are studying to work in, our field, or any part of the construction industry,” she said.

The gift also is helping to fuel FGCU’s incredible growth as it prepares to celebrate its 20th anniversary. “Just the other day, I was cleaning out my garage and found a campus map from 2000,” said Perez-Lavin. “I was showing it to my husband, saying, ‘See this parking lot? There are three buildings there now.’ It’s really cool to see the difference, and the impact FGCU has made on our community, how involved it is. People respect the school and what it stands for.”