As Florida Gulf Coast University pursues NCAA glory again, déjà vu is rippling throughout campus and the Southwest Florida community. For those who witnessed the dawn of Dunk City close enough to see the players’ sweat, it might be a tad more intense.

“It feels like a repeat of freshman year,” says cheerleader Lauren Hollie Allen, 22, a senior exercise science major from Gainesville, referring to the men’s basketball team’s history-making Sweet 16 run. “I didn’t really know what it meant then. It’s unbelievable to be able to do this again.” 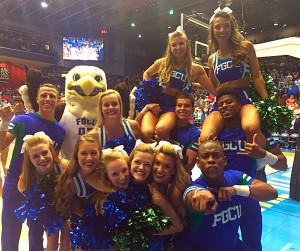 Then, she was “the baby on the team,” Allen says. “Now I’m the one calming down the freshmen, telling them it’s fun, don’t worry about it. It’s a really great experience I wouldn’t trade it for the world.”

Eight women and four men from the squad traveled with the hoops team to Dayton, Ohio, and Raleigh, N.C. The long hours of practicing cheers and thrilling acrobatic moves are paying off, as the team rallies the players and fans from city to city. They may lose a hair extension on the court – gracefully and quickly retrieved – but they never lose their energy and enthusiasm for boosting Eagle pride.

Caleb Houston, 24, from Gainesville, joined the cheer squad as an undergraduate and has continued lifting spirits as well as cheerleaders while finishing his master’s degree in criminal justice. He witnessed courtside Dunk City’s twin upset wins in the 2013 NCAA Tournament – as the man behind the mask of Azul.

“At Georgetown, it was like, — wait, what? What’s going on here?” he recalls. “After we came back from the San Diego State win, we could see what a big deal it was to the area community and to students. We gained so much school spirit off of two games. It was really exciting to be part of that. It’s astonishing to have this opportunity again to bust some more brackets. It’s history repeating itself.”

Houston is proud that he and his teammates are part of that history. They may be at their most dynamic and gravity-defying when they’re building those scoreboard-scraping formations on midcourt. But they’re also building a legacy for the next generation of proud Eagles.

“A lot of people think we just cheer, but it’s a family experience,” he says. “I transferred from another state college to a smaller school. The staff and faculty at FGCU really reach out to students and helps them. I think I want to stay here and give back to the university. It’s been a great experience for me, and I want to help others experience that.”