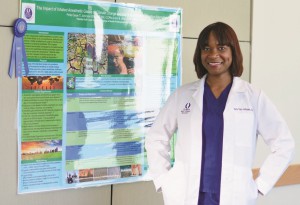 Her project took top honors at the Annual Congress of the American Association of Nurse Anesthetists in Orlando, winning out over entries from top  programs such as UCLA, Duke and the Mayo Clinic.

She devoted her capstone project to learning what happened to these gases once they had been used for operations and were released into the atmosphere. Her research turned up substantial evidence that the emissions were harmful, trapping heat and contributing to global warming.

“With more hospitals, more surgeries, people living longer and little regulation of the release of these gases into the atmosphere, the amount of emissions released is getting worse,” she said.

Her project includes recommendations that medical establishments decrease their use of nitrous oxide and prevent used gases from being released into the atmosphere, instead trapping and recycling them, something that’s done more widely in Canada and other countries.

“I hope to make anesthesia providers want to invest (in recycling systems) rather than wait for the government to force us to do it,” she says. “It would show we care about the environment.”

What Johnson found most gratifying about the project was that in speaking with others at the conference “most didn’t realize we could do something about these gases,” she says. “I felt honored that I could teach these people, many of whom have 20 or 30 years in the field. It’s not just about patients and hospital systems, it’s about the community, the nation, the world. We need to think big.”